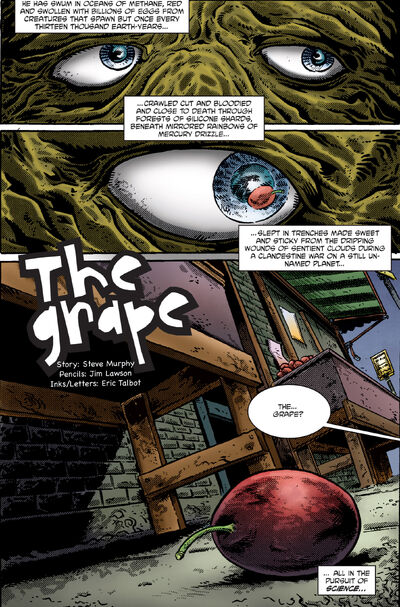 The Grape is a backup story published in Tales of the TMNT volume 2 issue 4: The Worms of Madness, Part 2. It is the first Professor Obligado story, before The Raisin'.

There is an unnamed Utrom.

The Utrom sees a vision of a single grape lying on city sidewalk.

The Utrom thinks of a single word—"police."

In a rundown New York City apartment, this Utrom and several others of his kind are wearing the same kind of headset, and all appear sickly and spaced out, and some are passed out and motionless. The one Utrom takes off the headset and walks into the apartment's bathroom, moments before the apartment's front door is busted in by a team of human police officers.

The male detective looks into the apartment's bathroom. The Utrom who walked in is gone, but the window is left hanging open.

The one Utrom has been climbing out the window, but loses his grip and falls...in vertical drop more than just several floors up from street level.

The Utrom bounces off an awning above a sidewalk fruit stand, knocking over some fruit.

The Utrom violently ricochets off a taxicab in the street.

The Utrom rolls onto the sidewalk, finally coming to a stop.

In front of the Utrom's face, he sees a single grape on the sidewalk. The life leaves his body, with human pedestrians as witnesses to his death.

Retrieved from "https://turtlepedia.fandom.com/wiki/The_Grape?oldid=509758"
Community content is available under CC-BY-SA unless otherwise noted.