After April receives a warning from her imprisoned father, she and the Turtles embark on a mission to save him and stop the Kraang from detonating a mutagen bomb in the city.

The episode starts off with April walking on the streets of New York as she often does. As she turns into an alley way, something flying sends her running in fear, as she quickly gets into a bank and watches a gargantuan pigeon Mutant crash right into the glass. After the pigeon abruptly takes off and flies away, April comments that her life has gotten really weird.

Meanwhile, in the Turtles' lair, Donatello is showing Leo and Raph that he learned how to make Ninja smoke bombs the other night with the use of egg shells. Michelangelo soon finds out about this as well and, with a smile on his face, he uses them to basically warp all over the place, inferring that he is quite impressed. April then rushes in and tells them about the Mutant pigeon that is apparently after her. The Turtles quickly decide to lure the pigeon out with April as bait so that they can capture it and find out what it's motive is. Just as they are about to leave, Splinter stops them and tells them that they don't know a single thing about their enemy and are being simply too overconfident. Leonardo says that they have defeated giant spiders, plant creatures, alien robots and an army of ninjas, and they think they are 'just that good'. It is obvious (by Splinter's facial expression) that he does not approve as the four rush off.

Elsewhere, in The Shredder's secret lair, we see Chris Bradford about to pet an Akita dog (apparently The Shredder's dog), when it bites him hard in the hand. The Shredder then appears - and claims that he is extremely disappointed with the both of them, as they have failed their respective missions now twice in a row. And he then claims that he has trained them both for many, many years, teaching them the ways of the ninja and molding them in his very own image. He then goes up to Xever and claims that he should've left him to rot away in the prison that he had found him in. Of course, both of them do not want their reputations to be tarnished whatsoever and they both try their luck in pleading for everything but The Shredder only ignores the two, and he now sees that the one and only option is that he must take his turtle enemies down by himself (as he had also stated in the previous episode).

Meanwhile, April wanders around on a random city street, making herself an open target for the pigeon to fly at her. After April and Donatello have a little argument about how she's not playing as good bait, the pigeon-man luckily appears. The Turtles taze him down and successfully capture him. The pigeon, named Pigeon Pete, reveals that he was actually sent by April's father to warn her about something terrible that is going to happen very shortly, and he wants her to leave the city as quickly as she can and at all costs. April refuses to leave the city without her dad, however, so the Turtles have to convince Pigeon Pete to take them to where The Kraang are holding him captive. However, some Foot Ninjas above overhear this plan. Meanwhile, Bradford and Xever are currently at a sushi bar discussing the problems that they've had with their master as of late, when they suddenly get a call from the Foot.

The Turtles sneak into The Kraang's secret base, while April reluctantly waits on the roof of the building. Donatello and Michelangelo try to hack into the machinery to find out what The Kraang are plotting to do next, while Leonardo and Raphael go off to find and rescue April's father. Through him, they find out that The Kraang are actually from another dimension and that the mutagen that they currently possess doesn't work there the same way that it works on Earth. So, apparently, they're desperately opting to kidnap scientists that have a certain skill set to help them modify the Mutagen. Donatello and Michelangelo then rush in, telling them that The Kraang are planning to detonate a huge bomb filled with Mutagen, which would end up spewing ooze over half of the entire city. Michelangelo accidentally sets off the alarm, alerting all of The Kraang, while Leonardo is finally able to set April's father free.

The Turtles try to escape the place, but there are just too many of The Kraang droids to do so. April's father grabs a blaster that falls out of an android's hands and starts firing at the nearby Kraang, buying the Turtles time to escape with his daughter. He asks them to keep April safe and save the city no matter what. April helps the Turtles escape, very upset that her father got captured once again However, Donatello promises that they will rescue him, but right now, they have to shift their focus to disarming that hazardous bomb.

Meanwhile, The Kraang are atop a place called the Wolf Hotel and one says that the Mutagen bomb will go off in five minutes. The Turtles then arrive and start taking down all of the robots with arrows. Donatello then finds the bomb, but he is confounded by how incredibly complex it is much to the others' annoyance. To complicate matters, Bradford and Xever then show up and start attacking the Turtles, Donatello tries to defuse the bomb as quickly as possible, while the others fight it out and begin loosing against The Shredder's top two deadly henchmen. Michelangelo yells for Donatello to cut the big green wire on the bomb, and sure enough, it actually works and the bomb deactivates. With the bomb promptly defused and Donatello back in the fight, the Turtles finally manage to overcome Bradford and Xever after a little while. Bradford then says that, if he's going down, he'll take the Turtles down with him and thus, he stabs into a Mutagen tank right next to him with his sword. This causes the mutagen to burst out and splash all over Bradford and Xever, sending them falling off of the building with a largely unknown fate.

Leonardo sums up that they had just defeated The Kraang, both Bradford and Xever, and also defused a bomb, which in turn, saved the entire city, claiming that they're 'just that good'. Suddenly, the Turtles hear in a booming voice, "Your skills are impressive...but they will not save you." And The Shredder then appears!!! Michelangelo tries to use a smoke bomb to allow of them to escape, but little does he know that he has already used up every single one of them, and he tosses down an ordinary egg by mistake, The Shredder then faces the Turtles one by one, and he takes them all down in single combat. Donatello then smashes his staff over The Shredder's helmet, but this only breaks the staff in two!! Desperately, Michelangelo wraps his kusurigama chain around The Shredder's arm and is actually able to hang him over the side of the building. However, The Shredder is not intimidated by this and rapidly frees himself by slicing off an absolutely huge chunk of the hotel's sign, which, in turns, lands on Mikey but doesn't maim him that much. As the other Turtles weakly free Michelangelo, Shredder gets ready for even more, and he defeats every single one of them in shocking mid-air combat.

As The Shredder puts his blade to Leonardo's throat, he also asks him where to find his sworn arch-nemesis Hamato Yoshi. Suddenly, Xever appears, mutated into a giant fish and gasping for air, as well as Bradford, now a gigantic mutant dog. Shredder then frees Leo, and is baffled to see his two men turned into strange creatures, but when he turns back around, he finds that the Turtles have already fled the scene which caused him to scream in anger and confusion.

Back in the lair, the Turtles are bruised, battered, broken and humbled. Splinter says that they are truly lucky to have faced The Shredder and survived. Leonardo says that he was right about them being overconfident. Splinter says that that no longer matters. He then tells his sons to prepare themselves physically and mentally, because as of this moment, they are at war... 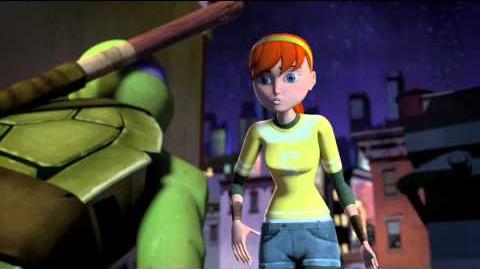 How do you know how Bait talks?