Fugitoid is a comic in the Mirage TMNT continuity published in 1985 by Mirage Studios.

While working on one of his inventions, the mentawave helmet, Professor Honeycutt is interrupted by Federation General Blanque, who reminds the scientist of a planned meeting between the two of them. Blanque wishes to see the progress on a transmat system, despite Honeycutt's lack of a prototype. After reflecting on his dislike of Blanque's wishes to use the transmat system as a weapon, Honeycut tests his mentawave helmet, discovering he can move small objects with his mind and sense his worker robot Sal's distressed thought impulses. After freeing Sal from a series of cables, Honeycutt and Sal are suddenly struck by a bolt of lightning.

After awakening, Honeycutt is shocked to realize that his body is no longer his own. He concludes that his mentawave helmet and the bolt of lightning fused his brain with Sal's, giving Honeycutt the body of a robot. Meanwhile, General Blanque and his men discover the remains of Honeycutt's body, and, after noticing the "robot" nearby, conclude that it must be responsible for the scientist's "death." Honeycutt uses his new body to evade the soldiers and runs into the forest nearby.

By listening to recordings in the professor's lab, General Blanque discovers that Honeycutt has become a droid. He labels the previous scientist as a "fugitoid", and informs his troops to capture Honeycutt alive. The general plans to force the professor to build the transmat for him, a task easily achieved with a being that has no rights.

Honeycutt manages to evade the soldiers with the help of some native creatures, who direct the Fugitoid to the city of Peblak. Meanwhile, after hearing about the fugitive's escape, General Blanque informs his aide Lonae on the importance of Honeycutt and his weapon. 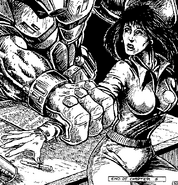 Add a photo to this gallery
Retrieved from "https://turtlepedia.fandom.com/wiki/The_Fugitoid%27s_Origin?oldid=461713"
Community content is available under CC-BY-SA unless otherwise noted.