In the IDW continuity, the Frogs are characters appearing in Teenage Mutant Ninja Turtles/Ghostbusters 2 issue #3. They are four street punk frogs appearing in a war-ravaged alternate reality visited by Leonardo and Winston Zeddemore. They steal Winston's dimensional-transport device, and attempt to take all the gear and weapons that Leonardo and Winston have on their persons. The two easily defeat the frogs in single combat, and the last frog standing timidly gives back the stolen machine. 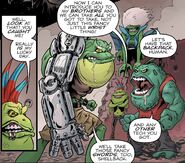 Retrieved from "https://turtlepedia.fandom.com/wiki/The_Frogs_(TMNT/GB)?oldid=580584"
Community content is available under CC-BY-SA unless otherwise noted.