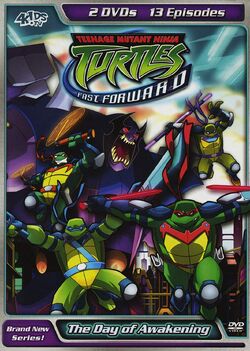 The Day of Awakening is a home media release of 13 episodes on two discs of Teenage Mutant Ninja Turtles: Fast Forward. It was released on January 13, 2004.

The Day of Awakening is at Hand!

When the entire population of Moonbase Bishop goes missing, it appears that Sh'Okanabo has jump started his plan to take over the Earth. The Turtles stage an assault on the base, only to find a bigger, baddder Sh'Okanabo - with an army of Kanabo Drones hiding on the dark side of the moon! And, to add to the chaos, Darius continues to ruin the lives of the Turtles with his evil "Dark Turtles" as he tries to take over Cody's company.

Retrieved from "https://turtlepedia.fandom.com/wiki/The_Day_of_Awakening_(home_media_release)?oldid=510671"
Community content is available under CC-BY-SA unless otherwise noted.