The Cruel Sea is a Mutanimals issue, published in April 1993.

The Mutanimals are disturbed to discover a beached minke whale cow on their island, entangled in a torn fishing net and close to death. Before the whale passes on, Man Ray psychically links with the whale's mind, learning that she was caught and injured in a fisherman's net before breaking free. Ray becomes enraged at her death, swearing payback, and single-handedly uproots a palm tree in a fit of anger.

Ray explains some of the issues surrounding whaling at the time (1993), including the International Whaling Commission's moratorium on all commercial whaling, and how two countries at the time—Iceland and Norway—continued whaling under the guise of scientific research but were suspected of still be whaling commercially. Ray intends to forcibly stop whatever ship nearby has been catching whales in its nets, and the other Mutanimals agree to help.

Ray and the team travel in canoes to a town on a coast under cover of darkness, where Ray announces he intends to shoplift some Zodiac rafts to launch an amphibious assault on the whalers. This disturbs his friends, who recognize that it means stealing from other people. But Ray tells them that whales are dying, and that stealing supplies can at times be justifiable in extreme circumstances to stop an even greater wrong. The team reluctantly accompanies Ray to a place called Kenton's Dive Shop, which is closed at the moment. Screwloose uses his own snout to pick the door's lock, and Ray carries out some of the shop's Zodiac rafts. As the team waits until sunrise to mount their attack, Ray becomes overwhelmed with anxiety that more whales may be dying at the moment. At Leatherhead's suggestion, Ray takes a swim to calm his mind.

When dawn breaks, Ray swims out as the other Mutanimals follow him in the rafts. Once out in open water, Ray dives underwater to meditate and listen to the ocean's surroundings, finally surfacing when he realizes the boat's coordinates at sea. A few miles away, the perpetrator is Cap'n Mossback, a familiar adversary of Ray's, who has already caught sixteen minkes whose meat he intends to sell. Ray and the Mutanimals launch a surprise attack on the boat's crew. After an initial assault, Ray announces that the boat and its crew are under arrest for violating an international whaling ban. Mossback retorts that his whaling operation is legal because he is sailing under the flag of Norway which does not recognize the moratorium. Mossback also hates that Ray's intervention had resulted in Mossback spending two years in prison for poaching sea turtles in "Fight the Power". Mossback orders his men to shoot Ray, but the vessel unexpectedly runs aground at a reef, tearing a gash in its hull. As the ship starts sinking, Mossback uses the moment to grab a dropped gun; he tries to shoot Ray, but Ray quickly manages to knock back Mossback first. As the vessel's human crewmen scramble to their lifeboats, the Mutanimals retreat to their rafts and watch the ship go under from a safe distance. Though the Mutanimals have prevailed, Ray regrets the violence of the incident. 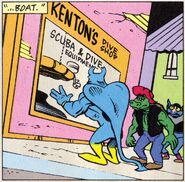 Retrieved from "https://turtlepedia.fandom.com/wiki/The_Cruel_Sea?oldid=504290"
Community content is available under CC-BY-SA unless otherwise noted.