"The Clothes Don't Make the Turtle" is the nineteenth episode of the second season (Episode 10B) of Rise of the Teenage Mutant Ninja Turtles and is the sixty-fifth episode overall in the series. It first aired on July 17th, 2020.

The episode opens with the Mad Dogs in a clothing store, the other Mad Dogs eager to see the new outfit Raphael was trying on. As a song called "You Got the Goods" was playing from a boombox on a nearby table, Raph opened the changing room curtain to reveal him wearing a very red suit and tie ensemble. Raph was just as eager to be judged by his brothers. Leonardo loved the outfit, but Donatello admitted he was not "in love" with it. Raph went from feeling fierce only moments ago to now feeling like a disaster. Michelangelo tried to reassure Raph that he looked fine, but Raph wasn't satisfied with just looking "fine" for the event they were going to. Leo and Donnie then began to help Raph pick other outfits.

Raph's next outfit went for the "bad boy" look with a ragged tank top and frayed jeans. The others shook their heads in disapproval. Next, Raph was wearing a bowtie and fedora. The others not only shook their heads but appeared rather disgusted. Next, Raph emerged from the curtain wearing a very loud track suit and then immediately struck a pose. The others shook their heads again. Finally, Raph emerged wearing a mostly white leisure suit ensemble. Donnie, Leo and Mikey immediately approved. Raph suggested they leave for the event, but Leo told him to wait, pulling out a pink "brand" T-shirt he was eager to try on for himself.

In the next scene, Leo finished putting on that shirt as part of an exercise-inspired outfit. The other three, now including Raph in his new outfit, all shook their heads in disapproval. Next, Leo slid on his feet to the side into view, his back to the camera, wearing only a shirt and socks and holding a candlestick in a routine parodying a famous scene from the film Risky Business. The others immediately laughed. Next, Leo emerged from the curtains dressed like an Old Western desperado and branding two bananas like pistols. Raph was unimpressed with the outfit, but Donnie and Mikey's reactions were decidedly more positive. Finally, Leo emerged wearing a flight-inspired outfit. The others immediately approved. Donnie then wasted no time telling Mikey it was his turn. Mikey kindly declined.

But in the next scene, Mikey had nevertheless emerged revealing himself wearing a largely white and black shirt and fedora. The others, now including Leo in his new outfit, shook their heads in disapproval. Next, Mikey emerged from the curtain dressed like a tennis player with a racket. The others shook their heads. Next, Mikey emerged wearing a colorful hip-hop-inspired outfit.

But Mikey stopped, realizing he didn't know why he changed clothes or what they were dressing up for. The others quickly realized they were struggling to remember the reason, too. Raph had the vague recollection that they were going to see a show.

In a flashback, back at home in the lair, Raph and Donnie were playing Hot Soup: The Game while Mikey watched, all of them dressed normally. Leo ran into the common area, kicked aside the game console and revealed that he had obtained four tickets to the Magic Town House's annual Night of a Million Secrets where Harry Houdini's secret journals were to be unveiled to the public for the first time ever.

Back in the present in the clothing store, the Mad Dogs were again looking at their event tickets. Mikey realized that if it was a magic show they were going to, it was a black tie event and they needed to change outfits again.

In the next scene, all the Mad Dogs were trying on black suits over white dress shirts and assorted ties and striking various fashion poses.

Impressed with how they were looking, Donnie took out his smartphone to snap photos of themselves, but he stopped and quickly noticed that his phone was already full of previously taken photos of the very event they were scheduled to attend—they had already been there, but they couldn't remember it. Donnie, who was in the habit of recording everything, played back a phone video from the event where the Mad Dogs were dressed in suits and ties and wearing feathered color-coordinated masquerade ball masks. As they were variously snapping photos of the exhibits, they spotted Hypno-Potamus, also suited and masked, trying to sneak his way out a door. Leo wondered if Hypno was trying to steal Houdini's journals, speculating that Hypno might learn from them how to warp the fabric of existence. The Mad Dogs resolved to follow Hypno and stop him from whatever he was planning.

Back in the present again, the Mad Dogs began trying to figure out why they were trying on clothes now if they'd already been to the event and were on their way to fight Hypno. Donnie remarked that their current black tie suits too dressy for a fight, suggesting they switch to business casual attire instead. Donnie started removing his suit in preparation for new clothes when Raph hastily slapped him in the face with a flip-flop and ordered that there would be no more outfits. The Mad Dogs were still struggling to remember what happened with Hypno.

The flashback continued with the Mad Dogs examining the hallways of the Magic Town House in search of their adversary, but Hypno was already aware he was being hunted by them. He caused a secret door to open in the wall, which was promptly noticed and investigated by the Mad Dogs. Hypno snuck behind them and forced them through the door.

Back in the present in the clothing store, Raph theorized they must actually currently be inside one of Hypno's magic traps, though he pinched Mikey to make sure they weren't dreaming instead. Needing to find a way out of their predicament, Raph became angry when he noticed Donnie grooving out to the 1980s boombox music in another new outfit: A yellow dress shirt with fuchsia scarf, black slacks and loafers. Mikey then realized that they must be trapped inside an 80s movie makeover montage. Leo asked what happens in those movies. Donnie took a moment to explain the movie makeover tropes, striking various poses from JoJo's Bizarre Adventure as he spoke. But Mikey pointed out that, at the ends of these kinds of movies, the protagonists realized that the clothes didn't matter and that they were already perfect just the way they were—and that so were the Mad Dogs here in this clothing store. The Mad Dogs took off their outfits and prepared to break the spell.

But what followed was another montage of scenes as the Mad Dogs actually kept trying on various different outfits and striking different poses—they were still stuck in the montage.

The heroes (not) breaking the spell

Donnie was happy to let it continue, but Leo had an epiphany and looked at the boombox on the table, and the other Mad Dogs looked with him. As they kept staring at the boombox playing its music, they saw brief disturbing flashes of Hypno's face. Realizing that the boombox was the spell, they all hastily smashed it, completely destroying both boombox and audiocassette. It not only brought a halt to the music, but the clothing stores and all their various outfits vanished as well—none of it had been real, and they were actually still inside the empty room at the Magic Town House. 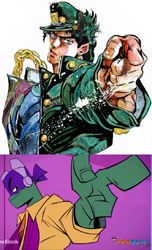 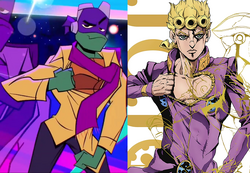 Rise of the TMNT ep. The Clothes Don't Make the Turtle - ROUGH ANIMATION
Add a photo to this gallery

Retrieved from "https://turtlepedia.fandom.com/wiki/The_Clothes_Don%27t_Make_the_Turtle?oldid=582281"
Community content is available under CC-BY-SA unless otherwise noted.