The Calling is an issue of the Mirage Comics, and part of the Raphael: Bad Moon Rising miniseries. It was published in October 2007.[1]

It's been almost a year since Darkness Weaves, when the 13-year-old Shadow and her friend Sloane attended a concert by their musical idol Lilith, only to find themselves in the middle of a werewolf ceremony that transformed Sloane, whose accidental death at Shadow's hands prompted the werewolf Lilith's vows of revenge and forced Shadow to relocate to the family farm for her safety. Shadow and her heavy-drinking uncle Raphael's evening of watching The Exorcist is interrupted by the arrival of Lucrezia, or Lulu as she is called, a young witch who is accompanied by Sloane, the very werewolf friend Shadow had once killed. Quick to forgive and bury the hatchet, the visitors beg Shadow and the magic-hating Raphael to help them find Lulu's disappeared mother, whom Raph is disturbed to discover is none other than Lilith herself. Raph reluctantly agrees to help for Shadow's sake, and Lulu uses her magic to transport them to the parallel shadow world of Nocturna. Sloane and Lulu summon giant bats to fly them to their destination with Raph struggling to adjust to flight. But en route, the group and their bats are intercepted by a flock of soul-eating opticarns. Raph and Shadow are warned not to look directly into the creatures' eyes, but it seems that Raph's gaze is already ensnared. 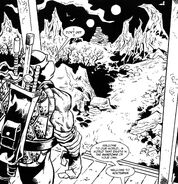 The world of Nocturna.
Add a photo to this gallery

Retrieved from "https://turtlepedia.fandom.com/wiki/The_Calling?oldid=461673"
Community content is available under CC-BY-SA unless otherwise noted.