Terracide is a storyline of the TMNT Adventures Comics, spanning issues 55 to 57, published between April and June 1994.

In it, the turtles travel back home from Jerusalem when the aeroplane crashes into the Atlantic Ocean, and Michaelangelo is picked up onboard USA's coastguard ship USCGS Dator.

While the Donatello and Leonardo set out to rescue him, the other turtles assisted by Slash, Splinter and the future turtles jump into the Stratoray heading for the Moon and Maligna's hive to stop Maligna and Null from destroying Earth.[1]

The storyline also deals with the deaths of the Mutanimals.[2] 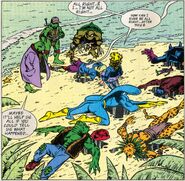 Retrieved from "https://turtlepedia.fandom.com/wiki/Terracide?oldid=506326"
Community content is available under CC-BY-SA unless otherwise noted.