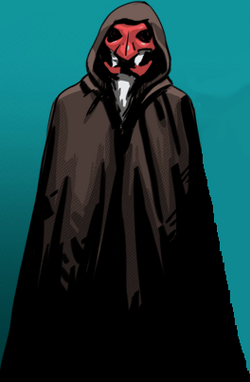 Like most species, they can be either good, or evil, or fall somewhere in between. The tengu have had a variety of different appearances over the centuries, including a skybound dog (hence, the name), a large bird-like creature, and more recently, human-like with large noses (and sometimes wings).

In Japanese folklore, Tengu are first described as human-like crows (Karasu Tengu), but over time their image is transformed into a more human form. In the latter version (Konoha Tengu) Tengu have a generally human appearance, but differ in their bird-like characteristics (spring growth and eagle claws on the extremities), their deep red color and their nose, which is remarkably long and curved.

Tengu live as small family groups in inaccessible mountains. They are generally not friendly people, the descriptions of their reactions in the vernacular and popular culture often differ. In previous representations (12th and 13th centuries) they are represented as declared enemies of the Buddhist faith, as demonic rebirth of priests who had died in disgrace. Later versions highlight the earlier good in their nature, so that a distinction between "good" and "evil" Tengu took place. However, all versions have in common that they are said to have magical powers, which they sometimes use to curse people who arouse their displeasure. However, the Tengu can in turn be easily tricked by particularly clever people.

Many legends are attributed to tengu. They have been said to have lived as mountain sages and were the creators of ninjutsu. They were masters of many forms of combat, especially armed combat, and were known for wielding, among other weapons, swords, naginata, and magical fans. The Japanese commander Minamoto no Yoshitsune was said to have learned his sword skills from a Tengu. There exist seventeen daitengu (大天狗), or great tengu, whose strength, knowledge, and power exceed all others of the species. The most powerful daitengu is named Sojobo.

In the episode The Legend of Koji, the Turtles are mistaken for tengu by Oroku Sancho's men.

Tengu is a race prominently featured in 4Kids' cartoon series. However, several seemingly contradictory statements in the series serve to obscure the origins and membership of this species.

Other than vague references such as the Sword of Tengu, Tengu are first mentioned in the episode The Ultimate Ninja. It is said that Ultimate Ninja and his father, the Daimyo, belong to a race that were mistaken for the earthly legend of the tengu, and like the real world legend, created what is known today as ninjutsu.

The origins of the tengu and ninjutsu are quite different in The Lost Episodes. In the 2003 animated series, the term Tengu seems to be used as a catch-all term in this season for a Japanese demon - often wrongly, because you have to imagine a spirit as a Tengu. The best known examples of this general designation can be found in the figures of the Tengu Shredder and the Kappa occurring in this series bringing forth such creatures as the Nezumi-Tengu (rat tengu) and Kappa Tengu (kappa being a separate species of demon unto their own). The most prominent tengu, however, is the original being known as The Shredder, a gigantic demon that terrorized Japan hundreds of years ago. He was defeated by the Five Dragons, who in this season, were the ones said to have created ninjutsu. The final blow on the demonic Shredder was performed by Oroku Saki, who had made a deal with the devil to absorb his power upon destroying its mortal form.

In the 2012 animated series online prequel motion comic Teenage Mutant Ninja Turtles: Tales from the Turtle Lair, Splinter tells a story of how the warrior spirit Sojobo, whose appearance closely adheres to the description of Konoha Tengu, would send his tengu to face a bushi (warrior) before they were able to be called ninja. This Tengu is a kind of symbol character, which would check an upcoming Ninja for his rise to the rank of Genin. Splinter, as Hamato Yoshi, faced this tengu, as do the Turtles in the present. The Tengu that tests the Turtles is secretly Splinter in disguise.

Retrieved from "https://turtlepedia.fandom.com/wiki/Tengu?oldid=544697"
Community content is available under CC-BY-SA unless otherwise noted.