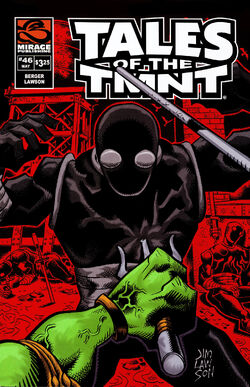 Temps is issue #46 of Tales of the TMNT volume 2, published on May 2008 by Mirage Studios.

As the Turtles balance on a girder facing an obligatory horde of Foot Ninja, Donatello once more ponders what the nature of what the Turtles do, honor bound to carry on this feud, and what the Foot do. And why.

Having recently returned from her time in California, April swings by The Daily Buzz, her favourite coffee shop run by the charming and musically talented Jiro, hanging out with his younger kid brother Tomi before he has to leave for school. Though Tomi idolises his older brother and would rather become a rockstar just like he once planned to, Jiro is adamant that Tomi attend and get a decent job for the sake of their elderly mother. After Tomi scampers off and April has enjoyed one of Tomi's perfect coffees the conversation takes a more sombre turn to the subject of his mother's health and how hard it's been for the family to make ends meet since his father was killed in what appeared to be a gang attack. As April leaves promising to stop by again tomorrow Jiro mentions that this is actually his last day behind the counter and that he has received a "better offer". April wishes him good luck, thinking Jiro is simply taking a step further towards rock stardom.

As night falls The Turtles prepare to leave their water tower lair for a reconnaissance mission using some new gadgets Don whipped up. Raph is antsy and ready for some action but Leo is as equally determined to keep the situation under control.

Jiro returns home to his delighted mother, who assumes he's come to his senses and changed his mind about the mysterious offer. Jiro explains he simply came to retrieve his father's old gear for an initiation, revealing that his father was a member of the Foot who died in combat. With the current gang war escalating the Foot's need for fresh manpower Jiro believes that he has an even better chance of joining the ninja clan and following in his father's footsteps, supporting his family with the benefits. His mother protests that Jiro's father wouldn't want that life for his son and begs him to focus on his music instead of risking putting the family through the pain of loss yet again, but Jiro's mind is made up.

The Turtles have set up on a rooftop overlooking the Foot's meeting place, with Don's tech picking up about twenty of them and Raph's mood souring at having to wait by the minute. Leo orders him to stay quiet as Don sets his gear to listen in on the enemy.

In his room, Jiro is holding his father's uniform, nervous about taking this big a step, when Tomi walks in on him. Telling him he's going to be just like their pappa, Jiro sends him back to bed promising to tell him the whole story when he gets home. Determined but still nervous Jiro suits up except for the mask and races to the rendezvous. He gets off to an inauspicious start, nearly late and his instructor having no time for his tardiness or apologies. He even has to order Jiro to put on his mask! Joining the other Foot, a group of experienced and initiates like himself, Jiro discovers that the initiation is an ambush of the enemy on the rooftop directly below.

The Turtles reconnaissance mission isn't going well. Don has managed to translate the Foot's use of Japanese to overhear about a training mission but Raph and Leo are arguing over whether or not to risk taking on this particular group right now to decrease the enemy's numbers even further. Before it can go any further Mike spots the incoming sneak attack and the fight is officially on. Don's new gear gets broken in the scuffle which, needless to say, displeases him a great deal. Leo orders his brothers to not be over confident just because some of the Foot are rookies, and to take them down before even more Foot show up.

Jiro and another initiate have the misfortune of facing off against Raphael, who is revealing in finally getting to cut loose. Surprised and horrified by the bizarre creatures their facing Jiro hesitates, with no idea what to do. Suddenly one of the more experienced ninjas grabs Raph, joined by the other initiate to hold the Turtle in place and ordering Jiro to attack. Determined to secure his place in the Foot and his family's future, Jiro readies his sword and lunges just as Raph breaks free!

Mike shouts a warning, giving Raph the chance to avoid Jiro's clumsy strokes. A last swing leaves Jiro wide open and Raph drives his sai straight into the would be ninjas chest.

The Foot meeting below have noticed the commotion and have finally reached the rooftop. Leo orders the others to scatter, giving Mikey the perfect chance to cross dropping a smoke bomb off his bucket list. As they take off over the roofs Raph complains about having to leave just as it was getting interesting!

The Foot ninja gather around Jiro's corpse and load it into a body bag. The instructors note that it's "not bad" that they have only lost one initiate. As the body is carried away the leader addresses the survivors, telling them that they have now seen what the Foot's enemy is capable of and to remember this single death as they will have vengeance for it as part of the Foot Clan. The new ninjas thrust their fists high and declare "FOR THE FOOT!"

The Foot arrive at Jiro's apartment with the body bag. They tell his mother that he died with honour as his father did and that she should be proud, before respectfully lowering the bag to the floor and simply leaving. Distraught, Jiro's mother unzips the bag and cries out in anguish at the sight of her dead son. As she weeps Tomi puts a hand on her shoulder, gently telling her not to worry.

Because he's going to get the ones who did this to his brother.

Frontispiece.
Add a photo to this gallery
Retrieved from "https://turtlepedia.fandom.com/wiki/Temps?oldid=509640"
Community content is available under CC-BY-SA unless otherwise noted.