Teenage Mutant Ninja Turtles Smash-Up is a fighting game for the Nintendo Wii and Sony PlayStation 2 video game consoles. It was released in North America on September 22, 2009 in celebration of the 25th anniversary of the Teenage Mutant Ninja Turtles franchise. The game is published by Ubisoft and is developed by former members of Team Ninja (responsible for the Dead or Alive and more recent Ninja Gaiden games) and Game Arts, who worked on Super Smash Bros. Brawl in cooperation with Mirage Studios. The character roster was decided by members of Mirage Studios, and the game's storyline is written by Peter Laird and Matt Leunig.

The plot involves Splinter holding a tournament for his sons, Casey Jones, and April O'Neil; Splinter himself also decides to join the tournament. After the winner is crowned, they are told to choose one trophy and something from Splinter's personal cabinet. However, suddenly, Professor Honeycutt calls them on the distress line, telling the Turtles that he has been kidnapped by the Shredder. Shredder breaks in on the communication and indicates that the line is not secure and taunts the Turtles, saying they won't retrieve Fugitoid. Pondering outside, Karai appears and says that the Shredder captured Fugitoid in order to force him to make a Transmat to teleport his armies all around the world.

After defeating The Shredder, Karai reveals that she used the Turtles to get rid of the Shredder so she could usurp the Foot Clan from her father. Shredder stands back up, and Leonardo kicks him into Karai. Honeycutt flips the switch on the Transmat, which Shredder and Karai have landed on, and teleports them to parts unknown. Back in the sewer, Splinter presents the prizes to the tournament's victor.

The game comes with a comic book that outlines the story further, up to prior to the Shredder's defeat. Scenes that were not in the game include Donatello rigging Renet's Time Scepter to transport them to Shredder's Tokyo base, but it malfunctions and they zap across time, which provides an explanation for the bizarre stages such as the Old West and Japanese Castle. Upon their first teleporting with the Scepter, a giant alligator bursts through a sewer wall, which is accidentally transported to an Amazon rainforest, which explains why the gator stage hazard is in both the Sewer and Amazon stages. While at the Japanese Castle, the Turtles face an army of samurai, which turn out to be the Japanese demon known as Oni. The story ends after Fugitoid is rescued, and the Shredder appears for battle.

The game is a four-player 2.5D fighting game, similar to the Super Smash Bros. series. During battle, players attempt to KO opponents by depleting their life bar, knocking them off the stage or into traps. Characters are color-coded on-screen via a glow effect to help players keep track of their character (a feature that can be toggled on and off in the options screen). Like Super Smash Bros., the game features many customizable options for battles.

The game stresses interaction with the environment, and stages in the game feature traps, changes to the stage itself and interactive elements. The gameplay system also features items, including life-restoring pizza and ninja skills that grant players special abilities like fire breathing and electrical shields.

The modes for this game are Arcade, Battle Royal, Survival, Tournament, Swap-Out, Practice, and Mission Mode, as well as an online mode for four players and mini-games. Players can collect 'shells' during battles or mini-games and use them to unlock special features, including trophies that other players can win in online tournaments. Arcade mode features animated cut scenes illustrated by Mirage Studios artists.

The engine of the game matches that of the Super Smash Brothers series of video games, but there are a few differences, one being that rather than a hit point counter, you have an actual health meter. Gameplay videos show that some characters are able to perform a wall kick, allowing them to jump off a wall. There is also an emphasis on using the environment to fight, meaning that in one stage, you will be able to use a sign to electrocute your enemies, and the environment also forcefully changes, meaning that fights will not always end at the same place.

The game is also was worked on by Team Ninja, who made the Ninja Gaiden and Dead or Alive games, this can be seen in the combat, which includes red poles which characters can swing on. They are also working on the Story mode gameplay. 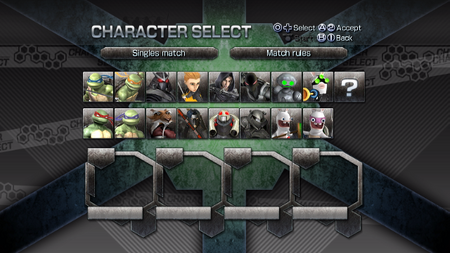 The game's roster was chosen by Mirage Studios, and is said to have characters "You know well in addition to surprise characters you wouldn't expect."

Not all of these characters are present in the game's story mode.

Some, but not all, characters, have unlockable alternate costumes, many of which have roots in TMNT history.

The game was developed by a Japanese game developer Game Arts, who had previously worked on Super Smash Bros. Brawl, and by several former members of Team Ninja,[1] who previously worked on Ninja Gaiden II and the Dead or Alive series. It was announced on January 23, 2009.[2] The game is not specifically tied to any previous Ninja Turtles license, yet bears a similar artistic style to the 2007 CGI animated film TMNT.[3] Mirage made character selections for the game, and the roster was said to include characters "you know well in addition to surprise characters you certainly wouldn't expect."

The game's critical reception has been positive reviews. IGN gave TMNT: Smash Up a score of 7/10, stating that it is "a Smash Bros. clone, but it makes you want to play Smash Bros. instead."[4] GameSpot also gave it a 7/10, stating that the game "has good combat and solid content, but it lacks the refinement and razzle-dazzle to earn a title shot."[5] Even so, some fans reacted negatively to the roster, which is significantly smaller than that of Super Smash Bros. Brawl and contains characters only seen in the 2003 cartoon series and 2007 film, while characters from the 1987 TV series and other films were ignored.[6]

Retrieved from "https://turtlepedia.fandom.com/wiki/Teenage_Mutant_Ninja_Turtles_Smash-Up?oldid=546727"
Community content is available under CC-BY-SA unless otherwise noted.