The Teenage Mutant Ninja Turtles Macro-Series is a mini-series of four comics, each concerning one of the four Turtles. They were published between September and December of 2018 by IDW Publishing. The series' title hearkens to the older 16-issue Teenage Mutant Ninja Turtles Micro-Series published between November 2011 and September 2012, which themselves hearken to the much older Mirage continuity one-shot issues published by Mirage Studios between April 1985 and December 1986. This series is named a "Macro-Series" because each issue at 40 pages (46 for Raphael's) is double the usual length of IDW TMNT comics. 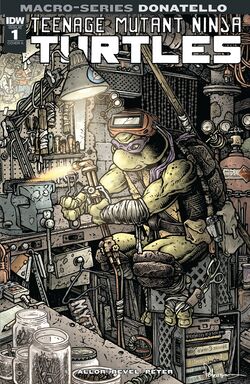 TMNT returns to its roots with new spotlights on individual Turtles, but this time they're extra-large! Donatello understands that more is at stake than his brothers realize. In order to prepare for the coming conflict, Don will aim to repair his relationship with his mentor Harold... and his malicious robotic counterpart Metalhead! 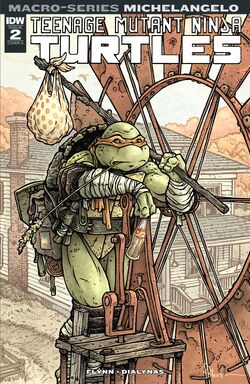 Michelangelo’s deteriorating relationship with his father, Splinter, reaches a point of no return! Will Mikey fight those he loves to save those who need him the most? 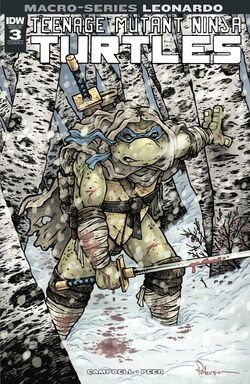 Leonardo seeks refuge in Northampton but danger follows-in the form of Koya and Karai! An epic throwdown will result in Leo making a drastic decision that will quickly alter the course of TMNT history! 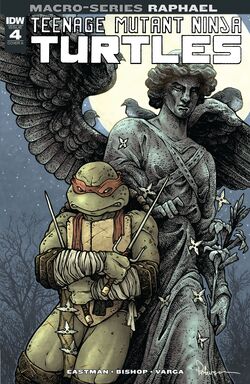 Raphael is pushed to his breaking point as he is separated from his brothers and forced to endure an onslaught from the nefarious Bishop unlike anything he has experienced in the past!

Retrieved from "https://turtlepedia.fandom.com/wiki/Teenage_Mutant_Ninja_Turtles_Macro-Series?oldid=427201"
Community content is available under CC-BY-SA unless otherwise noted.