Teenage Mutant Ninja Turtles III: The Manhattan Project is the third TMNT NES video game. It is a side-scrolling beat-'em-up released by Konami for the Nintendo Entertainment System. It released December 13, 1991 in Japan, and February 1992 in North America.

The game begins with the Turtles spending their vacation in Florida. While watching April O'Neil's latest news report, her program is suddenly interrupted by the Turtles' arch-nemesis, Shredder. Taking April as his hostage, Shredder reveals that he has also turned the entire city of New York into a floating island Manhattan Island and challenges the Turtles to come to his lair, the Technodrome to stop him. After they rescued April who told them that Manhattan Island is being controlled by Krang's spaceship which cause the city to levitate into the sky.

The controls are mostly unchanged from the second NES game, with one attack button and one jump button. The turtles can now perform a toss attack against their enemies by holding the d-pad downwards while pressing B. Each turtle also has a different special attack that is performed by pressing both buttons simultaneously. Every time the player performs this attack, one point of health will be used (unless the turtle only has one point of health left, in which case, it won't be used up).TMNT III can be played by up to two players simultaneously, with each player controlling a different character. The player can choose between any of the four turtles: Leonardo, Raphael, Michaelangelo, and Donatello, each wielding their signature weapon. Two different 2-player modes are featured in the game, mode A allows the turtles to hurt each other, while mode B does not. The player has a limited number of lives that gets depleted every time the player's energy gauge runs out. If one player has run out of lives, they can use the remaining ones from the other player's remaining stock (a second player can join part way through the game using this method in mode A). The player is allowed to change their character every time they lose life (but player one and two can not be the same turtle at the same time). Up to three chances to continue are provided.

The game is composed of a total of eight levels, spanning from the beaches of Florida to the floating island of Manhattan, ultimately concluding with Shredder's lair, the Technodrome. The game's regular enemies includes a variety of Foot Soldiers, as well as Giant Mousers and Stone Warriors. The game's bosses includes villains from the 1987 cartoon series and toyline. Despite the fact that the cover art features the Turtles fighting a Triceraton, no Triceratons appear in the game.

Foot Soldier-Common purple enemies that try to attack you.

Sand Soldier-Rare yellow foot soldiers.They try to toss sand or pounce on you, still are rare enemies though.

Ninja-Star Soldier-Rare red enemies that throw ninja stars at you.

Rolling Soldier - Rare enemies that roll at the turtles, they only appears on the technodrome stage and the starship stage 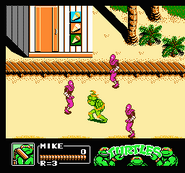 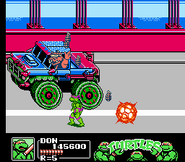 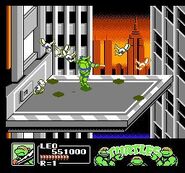 Add a photo to this gallery
Retrieved from "https://turtlepedia.fandom.com/wiki/Teenage_Mutant_Ninja_Turtles_III:_The_Manhattan_Project?oldid=496745"
Community content is available under CC-BY-SA unless otherwise noted.