While the top LCD screen displays an image of the Data East backglass (originally painted by Paul Faris), the gameplay on the second LCD screen is distinct from the Data East unit but incorporates some elements from the original table, such as a spinning pizza disc, and objectives to light four sets of targets corresponding to the colors of blue, orange, purple, and red.

A fully functional miniature version of your favorite arcade game from the summer boardwalk to the after-school Mall video arcade.

This fully functional, miniature Teenage Mutant Ninja Turtles pinball machine measuring 1.75(L) x 4.25(H) x 3.5(W) of an inch, may be the coolest pinball game Ever! It fits in the palm of your hand!

Control the flippers from the front and back control buttons for easy a push the ball through bumpers, tracks, and rebounds – make the pizza spin!

Perfect for any Boardwalk Arcade fan! Recommended for ages 8 and up. 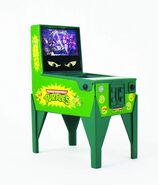 Retrieved from "https://turtlepedia.fandom.com/wiki/Teenage_Mutant_Ninja_Turtles_Electronic_Pinball_(Boardwalk_Arcade)?oldid=540838"
Community content is available under CC-BY-SA unless otherwise noted.