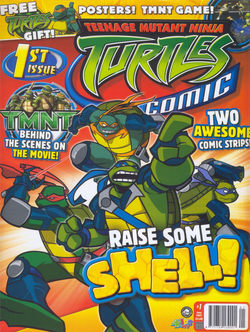 Teenage Mutant Ninja Turtles Comic was a magazine published by Titan Magazines in Europe. Despite its name, it had much more than comics featured in the issues, with interviews, games/puzzles, and more, as typical children's magazines typically do.

Retrieved from "https://turtlepedia.fandom.com/wiki/Teenage_Mutant_Ninja_Turtles_Comic?oldid=396176"
Community content is available under CC-BY-SA unless otherwise noted.