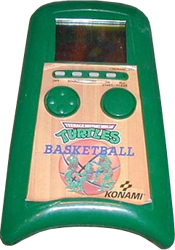 Teenage Mutant Ninja Turtles Basketball is an LCD game from Konami, featuring the Ninja Turtles playing the sport of basketball. It was released in 1991.

Introducing Heroes on the Half Court

Believe it or not, the Teenage Mutant Ninja Turtles and the evil Shredder have agreed to set aside their differences, and their weapons, in order to meet on the basketball court. In this first annual classic, you'll always control the turtles on offense, trying to run up the score against a shrewd turtle trashing team.

Ready for a Little One-on-Four, Dude?

You'll play four 2-minute quarters, each one with a different turtle. After the 1st, 2nd and 3rd quarters there will be a Bonus Period lasting 30 seconds. If you miss a shot or have the ball slapped away from you, the ball is thrown in to the H, I, or J positions.

How to Take Your Best Shot

Press the ACTION CONTROL Button to move your player to any of the 10 positions on the game screen (A-J). You can push the ball upcourt by moving vertically or horizontally, but not diagonally. When you have the shot, press the SHOT Button. The point value for each basket varies, depending on your position.

If you can get past Rocksteady, Bebop and Shredder, you'll find yourself in the "A" position just inches from the rim, which also puts you in Baxter Stockman's face. You'll have just one second to rock the rim with a slam. If your hang time is longer than one second and you fail to get the shot off, you'll automatically miss and be sent back to the "J" position.

NOTE: After your change the batteries, press the ALL CLEAR Key with a ballpoint pen to clear the screen. The game turns itself off if not in use for a period of 60 seconds.

Retrieved from "https://turtlepedia.fandom.com/wiki/Teenage_Mutant_Ninja_Turtles_Basketball?oldid=511154"
Community content is available under CC-BY-SA unless otherwise noted.