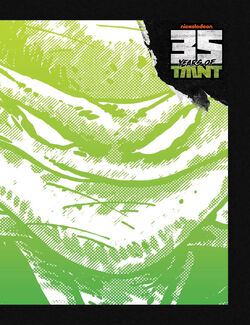 Teenage Mutant Ninja Turtles 35th Anniversary Box Set is a set of reprints from IDW Publishing celebrating the 35th anniversary of TMNT, with a box cover featuring a new illustration by Kevin Eastman. Each of the comics is presented in its original size format. It released on June 19, 2019.

Revisit the glorious origins of the TMNT during the 35th anniversary month! This special box set includes Mirage Publishing’s TMNT #1-4 and the Raphael Micro-Series at their original 8 ⅜” x 10 ⅞” dimensions enclosed in a box with new art from TMNT co-creator Kevin Eastman. A must-have for all shell-heads!

Retrieved from "https://turtlepedia.fandom.com/wiki/Teenage_Mutant_Ninja_Turtles_35th_Anniversary_Box_Set?oldid=479988"
Community content is available under CC-BY-SA unless otherwise noted.