This is the second annual in the IDW continuity. It was released on June 25th, 2014.

The Turtles and their friends have returned to New York City after their respite in Northampton, Massachusetts was cut short by the Foot Clan (see Northampton Part Four). Master Splinter dwells on New York City's ability to make so many different people feel at home. Splinter decides that of all the improvements to their home underneath the abandoned church, he appreciates increased ventilation the most. As Splinter is lost in his thoughts, Donatello and Michelangelo prepare a trap for Raphael who should be returning home for a patrol run soon. Leonardo is out on a patrol run as well, and April and Casey have gone on a date to a hockey game. Casey tells April about playing hockey and then the two of them wonder what the Turtles are up to.

Under the church, Don and Mikey fine tune the mechanics of their trap, which will send Raph bouncing back and forth and then down into the water below. Splinter warns the two that they only stand to provoke Raph's temper by pranking him. Just then Raph and Leo arrive home at the same time and spring the trap together. Before the trap has time to spring there is a bright flash of blue light and a stranger tumbles out. It is a woman in a blue skinsuit and cape, carrying a strange looking scepter and a helmet that has fallen off of her head. She introduces herself as Renet but asks as if she is already familiar with the Turtles. Renet tells the Turtles that she and her boss are trying to take down a gladiator combat arena but they need skilled fighters, so she thought of the Turtles. Seeing the Turtles confused faces, Renet realizes that she has come back in time to a point before the Turtles first met her. Raphael guesses exactly that, that Renet is a time traveller. Before anything else can be explained, Renet tells them that she'll explain everything later. With another flash of blue light, Renet and the Turtles are transported elsewhere. Splinter, hearing a loud noise, emerges from the restroom to see the Turtles are gone and thinks they must have gone on a patrol run.

Renet and the Turtles are flung through space and time before arriving at a large city built on an asteroid in outer space. A cruel man greets the group when appear, telling Renet that she barely made it back before the start of the competition. The man orders the Turtles be put in a cell with someone called Baltizar. Renet assures the Turtles that they'll be able to survive the competition and promises to bake them a cake after it's over. The Turtles are brought to a cell where a long-haired man sits. He does not think the Turtles are worthy battle mates and tells them to stay out of his way. The man, Baltizar, takes some time to explain how the gladiatorial competition works. He explains that they were all gathered here by the Dimensional Council, who hunt down the best fighters from across the galaxy every twelve cycles and force them to fight. The winners get to fight on, but the losers are transported to a slave camp to live out the rest of their lives. Before the fighting begins, Baltizar shows the Turtles the store of gladiator weapons. He explains that they will only work in the arena, and if killing blow is about to be struck then the enemy combatant is instantly beamed to the slave camp. Baltizar tells them that the final gladiator standing is beamed away to a paradise, but no one has proof that the place even exists. The Turtles arms themselves before the guards summon them to the arena.

As Baltizar and the Turtles are brought into the arena with the other combatants, Renet cheers them on and reminds them about their secret plan. The fighting begins and Baltizar leaps into action, managing to eliminate another combatant right away. The Turtles are right behind him though, and with the two parties working they manage to eliminate all the other combatants. Tired and weary, the Turtles are ready to head back home, but the Dimensional Council announces that they will fight again the next day, against three times as many combatants. Baltizar and the Turtles are escorted back to their cell, dejected. The Turtles ask if anyone has ever thought to try and overthrow the guards and the council to end the games, but Baltizar told them that no one had ever been able to unite the gladiators against their common enemy before.

Renet goes to visit her mentor in his cell. Her mentor used to be on the Dimensional Council but was sentenced to prison by Councilman Nieli for trying to end the games. Renet tells him that her friends Baltizar and the Turtles are capable enough to carry out their plan, so they should go through with it.

Baltizar is woken by a guard shocking him. The guard tells Baltizar and the Turtles that they are fighting in one minute, and because Baltizar is weakened they are sure to lose. They are brought into the arena and the Turtles position themselves around Baltizar in order to protect him. The fight begins and the Turtles fight to keep the other gladiators away from Baltizar while he recovers. In the holding cells, Rangor tries to rally the gladiators to rise up against the guards and the Dimensional Council. In the arena, Baltizar is regaining his strength and he and the Turtles are making short work of the other gladiators. Councilman Nieli is furious as he watches the scene unfold. Baltizar pledges to fight for the captured gladiators and the crowd cheers on him and the Turtles. Nielie is furious and orders every last guard be sent in to stop them, but it is the straw that broke the camel's back. The guards begin declining to carry our Nieli's orders, just as Renet arrives to whip them into a frenzy at being used by Councilman Nieli for so long. At the same time, Rangor leads an escape from the prison cells.

In the arena, Baltizar and the Turtles face off against a Triceraton, one of the fiercest combatants, Zog. Renet, unable to resist any longer, leaps into the fray to join the Turtles and Baltizar, whom she has fallen madly in love with. The crowd is nearly a riot at this point and the other escaped prisoners arrive in the arena. Just then Renet's mentor Simultaneous, a former council member, arrives and decrees that enough is enough, and the games will stop, as Council Leader Nieli was the only one who enjoyed the bloodshed for sport. Simultaneous calls for one of the gladiators to spear for the group and tell the council how they feel. Baltizar says that no longer will they serve for the council's amusement, and Leo teaches everyone about the Olympics. The council deposes Nieli and ends the games, instead deciding to hold a competition called the Battle Nexus, for all the best warrior from all the realms to come and test their skill, and be gambled on. Lord Simultaneous is reinstated as a council member by Council Speaker Gauge. Baltizar says goodbye to the Turtles and Renet uses her scepter to zap them back home.

The Turtles arrive back in their lair just seconds after they left. Leo manages to land directly on the pressure pad for the trap Donnie and Mikey had set up earlier and he is thrown into the sewer below. Leo is at first angry but then can't help but laugh. Splinter then pushes the other three Turtles in behind him. Mikey wonders what Renet and Baltizar are up to.

Renet and Baltizar are having some alone time near some dinosaurs. Renet is glad to finally have a vacation and asks Baltizar if he wants to go to the 14th century to get some Chinese food. 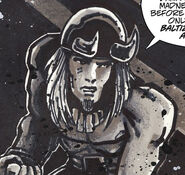