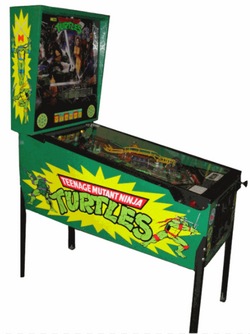 Teenage Mutant Ninja Turtles was a 1991 pinball machine. It was developed by Data East.[1]

The playfield artwork is credited to Kevin O'Connor, while the backglass artwork was painted by Paul Faris.

According to Stern Pinball, the unit was the world's first game to have "twin ramps," the second game to feature the new DMD display, and the first to have a underground shot, a thematically-appropriate "subway."[2]