The player chooses from one of the four Ninja Turtles: Leonardo, Michelangelo, Donatello, and Raphael. After Shredder kidnaps the Turtles' friend April O'Neil and their mentor Splinter, they must give chase, save their comrades, and defeat the evil Shredder. Up to four players (two in some versions) can take control of any of the turtles. Donatello has slower attacks but a longer range, Michelangelo and Raphael have fast attacks but a short range, and Leonardo is a well-rounded Turtle with average range and speed.

The eight-way joystick controls the movements of the Turtle, the jump button makes them jump and the attack button makes them hit in front of them using their weapon. In addition to this, some combinations are possible. The Turtles can throw Foot soldiers overhead, and by pressing the jump and attack buttons, a special attack is performed. Raphael rolls along the ground and finishes with a kick, while the other Turtles do a sweeping jump attack with their weapons. Turtles can also spring off the wall in certain areas. Enemies can be defeated more quickly by slamming them into walls or solid objects. Many objects such as traffic cones, parking meters, fire hydrants and exploding oil drums can be hit or damaged with attacks in order to help defeat nearby enemies. In the attract mode, the game showed the first part of the cartoon opening, along with a portion of the Teenage Mutant Ninja Turtles theme song.

Each Turtle has their own slight advantages and disadvantages. Raphael has the shortest range, but is the quickest to attack. Leonardo and Michaelangelo are mid-range and have average speed, and Donatello is the slowest, but has the longest range. Pressing the Attack and Jump buttons simultaneously allows the chosen Turtle to execute a special attack which consist of a twirl with their weapons in a small jump, except for Raphael, who rolls about mid screen distance and stabs with his sai.

The majority of the enemies the Turtles must face are the Foot Soldiers. They wear a different colored uniform depending on what weapon they have. The purple-clad Foot Soldiers also have the ability to hold the Turtles from behind, draining their health and leaving them open to attack by the other Foot soldiers.

The most well-known port of the game is on the Nintendo Entertainment System (NES), known as Teenage Mutant Ninja Turtles II: The Arcade Game to distinguishing it from the previously released Teenage Mutant Ninja Turtles video game for the NES. This is also the title in which it is known on the Atari ST. The Family Computer (Famicom) version in Japan retained the original title, since the first game was released under a different title in Japan. The port was released in 1990, and although featured reduced graphics and only supported two players, it also added two new stages that were not present in the original arcade version (the first part of Scene 3 and all of Scene 6), which culminated with the new enemy characters, including two new bosses Tora and Shogun (both characters created for the game), and replaced the Bebop and Rocksteady boss fight from the second half of Scene 3, the parking garage stage, with Baxter Stockman's fly mutation. The NES version of the game was once slated for release on the Wii Virtual Console, but was quietly canceled. The NES port also appeared in Nintendo's PlayChoice-10 arcade system. This is one of the first ever home video games to feature product placement advertising in the game itself—Pizza Hut logos to be exact. The game's manual also came with Pizza Hut coupons.

Teenage Mutant Ninja Turtles was also released on Amiga, Amstrad CPC, Atari ST, Commodore 64, DOS PCs, MSX, and ZX Spectrum. A port of the game, with edited voices and sound effects, as well as different music was an unlockable bonus in 2004's Teenage Mutant Ninja Turtles 2: Battle Nexus for the Gamecube, PlayStation 2, Windows PC, and Xbox. In 2007, a slightly enhanced port, with some graphics from the 2007 TMNT movie in areas such as the border, and online play was released on Xbox 360's LIVE Arcade service by Ubisoft, costing 400 Microsoft Points.

The computer ports of the arcade game released by Image Works and ported by Probe Software in 1991 for the Amiga, Amstrad CPC, Atari ST, Commodore 64, IBM PC (DOS), MSX, and ZX Spectrum. The title was changed to Teenage Mutant Hero Turtles: The Coin Op in the European versions ("Hero" being the re-branding of the license in Europe due to censorship issues) and lacked the extra stages and bosses from the NES game.

An Xbox Live Arcade version of the game was released under the name TMNT 1989 Classic Arcade on March 14, 2007, published by Ubisoft and ported by Digital Eclipse. Like other classic arcade games on the Xbox 360 platform, portions of the original arcade game are emulated with network code and other new features added. Players can earn achievements as well as play 2-4 player co-op (both online and offline). Certain aspects, such as the character select screen, were based on images from the 2007 film. It has since been removed from XBLA.

Back side to Japanese flyer art.

Back side to American flyer. 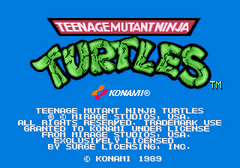 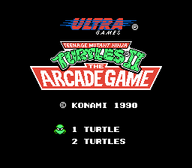 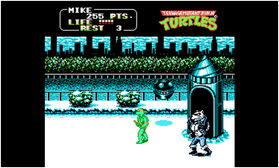 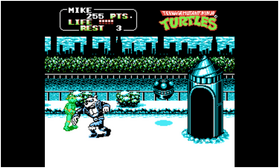 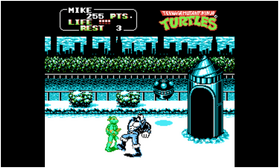 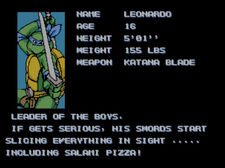 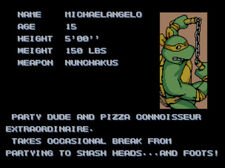 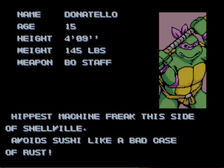 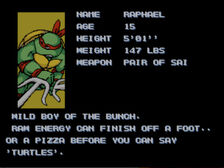 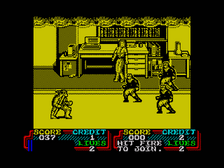 Retrieved from "https://turtlepedia.fandom.com/wiki/Teenage_Mutant_Ninja_Turtles_(arcade_game)?oldid=552986"
Community content is available under CC-BY-SA unless otherwise noted.