In 1989, Konami released a Teenage Mutant Ninja Turtles handheld game to coincide with their NES game of the same name. The gameplay was unique for the medium, and resulted in Konami filing for a patent.

In the United Kingdom, the game was rebranded as "Teenage Mutant Hero Turtles" and distributed in cooperation with Hornby, London-based toy company, not to be confused with a Grandstand's 1991 lcd handheld game of the same name.

Prepare to shell out some punishment. Beloved April has been kidnapped by Shredder, a villain more vicious than an army of mind-altered Bruce Lees. Now you must play the role of your favorite Teenage Mutant Ninja Turtle and rescue her before she becomes a brain-washed member of his nasty Ninjutsu Foot Clan.

Fighting for your life (and April's).

From the start, you'll have three Turtle lives to lose. Each time you're touched by the Shredder Shuriken, the Pizza/Turtle Cutter or one of the Shredder's hench-creatures (Mouser and Flap Jaws), you'll be turned into turtle soup. You'll also be shell-shocked if you bump into the Great Electro-Barrier Reef.

A final death threat is the Underwater Time Limit in games 2 and 3. If it reaches 0, your breathing days are over.

The simplest of your rescue missions, all you need do is battle your way into the water, find the Freedom Key, then unlock April's chains. Wait, that's not so simple! Considering you can't enter the water until you've knocked off a horde of hench-creatures, and you can't reach the key without avoiding the treacherous sea hazards.

Like Game 1, you have to battle past land enemies before entering the water. Only now you must retrieve bombs and set them off around Shredder's Asylum until the shatter-proof shield shatters (careful - if the bombs aren't perfectly placed, April will go up in smoke). Once the shield is down, it's back in the water to find the Freedom Key, which is hidden in a box. To find the right box, press the TURTLE CONTROL button. This will move a "selection bar" over the box of your choice. To open the box, press the SLICE AND DICE Button. If the key's in there, it's back to April for the final rescue. If it's not, you'd better hurry up and find it before your time runs out.

"A novel hand held electronic LCD video game with 19 player-controlled ninja turtle figures individually displayable under player manipulation to simulate rescue of a kidnap victim. The player controls the displayed position of the turtle figures to defend against attack by game controlled mouser figures and throwing star figures. A game processor controls display of player and game controlled image segments to simulate movement of mouser creatures and throwing stars attacking the player controlled turtle figures. The player controlled turtle is manipulated to perform simulated underwater swimming to obtain dynamite multiple times and a key to free the victim. The player must also manipulate the turtle figure to approach and free the victim while simulating punching and use of a sword to defend against attack. One of three levels of difficulty may be selected by the player." 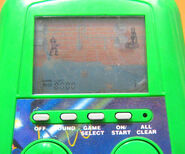 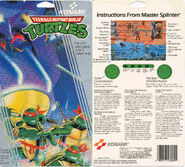