Teenage Mutant Ninja Turtles is a 2003 Game Boy Advance video game, based on the 2003 TV series. In this game each Turtle has his own unique set of levels to complete. In addition to the traditional side-scrolling levels, there are third-person view races, a shell-glider level for Donatello and a bike race between Raphael and Casey Jones. The game was also issued in a double pack with it's sequel TMNT 2: Battle Nexus.

Teenage Mutant Ninja Turtles is a regular beat 'em up platform game. After the player chooses one of the Ninja Turtles, each of whom has a special ability, the character enters a set of four acts, one of which is a vehicle-riding minigame. Leonardo can crawl through small spaces and rides the hovercraft Sewer Slider for a rail shooter minigame. Michelangelo can wall jump, and rides a skateboard through sewers. Donatello climbs pipes and has a shoot 'em up level using a hang glider. Raphael uses his sai to climb walls and has a motorcycle racing minigame riding the Shell Cycle against Casey Jones.

Shortly after a group of Mouser Robots destroy the Turtles' old home, they begin to attack their new home. Eventually the Turtles trace the robots back to Baxter Stockman's factory, where they save young April O'Neil. Afterwards Michelangelo gets on Raphael's nerves, making Raphael leave to the surface. At the surface, he is confronted by Purple Dragons' thugs, and meets Casey Jones, who equally hates that gang. Afterwards Stockman develops for the Foot Clan invisible Foot Tech Ninjas to capture Raphael, forcing the Turtles to rescue them and Donatello to use a cloaking device detector to properly fight the invisible ninjas. Afterward, they are confronted by genetically mutated beings.

Once all four levels are completed, the Turtles strike on the Foot Headquarters, where they fight Hun before going after the Foot leader, The Shredder.

Shortly after a group of Mousers destroy the Turtles' old home, they begin to attack their new home. Afterwards, Leonardo goes further into the sewers, where he saves April O'Neil. April reveals that the Mousers are a part of an evil plan by her boss, Baxter Stockman, so the Turtles decide to stop him. Leonardo drives the Sewer Slider to arrive into Stocktronic Industries from underground. Leo then invades the laboratory, which has been overran by Ninjas. At the central control, Leo fights the Giant Mouser. Following its defeat, the Turtles go back to their hideout with April, and Stockman is brought by Hun to their boss Oroku Saki.

Michelangelo eventually gets on Raphael's nerves, making Raphael leave to the surface. At the surface, he is confronted by Purple Dragons' thugs, until he meets Casey Jones. After Raph beats Jones in a motorcycle race using the Shell Cycle, Casey opts to join forces with him against the Purple Dragons, defeating subleader Dragon Face.

Invisible Foot Tech Ninjas capture Raphael, and after fighting more Purple Dragons, Donatello tracks him back to Stocktronics. After rescuing Raph and flying away in the Turtle Glider, Don fights the Invisible Ninjas using a special forcefield.

After a security perimeter is breached, the Turtles go down into an abandoned subway line. There Michelangelo fights Foot Soldiers, and eventually lots of Underground Monsters.

This GBA version received mixed to positive reviews by critics. The graphics and mini-games were complimented, but the gameplay was found repetitive and complaints were raised against the lack of multiplayer. 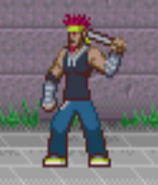 Retrieved from "https://turtlepedia.fandom.com/wiki/Teenage_Mutant_Ninja_Turtles_(Game_Boy_Advance)?oldid=547527"
Community content is available under CC-BY-SA unless otherwise noted.