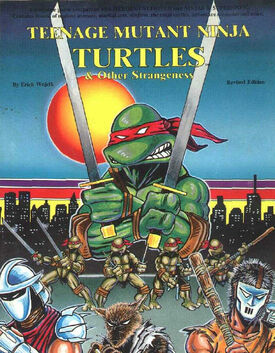 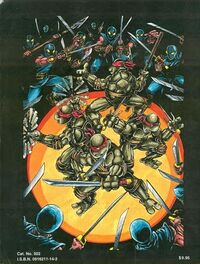 The game was licensed before the Turtles franchise rose to popularity, first published by Palladium Books in 1985, and featured original comics and illustrations by Eastman and Laird. The rules system is Palladium's Megaversal system. A small section of the rules, giving the basics of character creation and a short-list of animal options, was included in the second edition of Heroes Unlimited.

When the 1987 cartoon series was released, it affected the sales negatively because of public reputation of the Teenage Mutant Ninja Turtles franchise had changed from one mainly associated with adults to one mainly associated with young children, and this alienated or unnerved most of the adults and older teenagers who were the primary target audience of TMNT&OS. Sales dropped from 50,000 copies one year to 12,000 the next. The year after, they dropped to 6,000 copies. They decided not to renew their license in 2000. 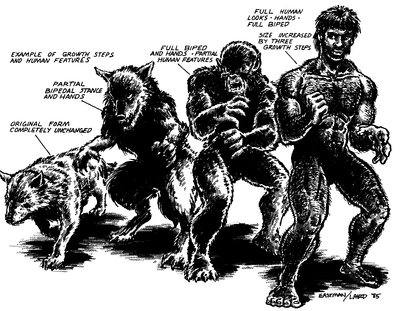 Turtles and rats were not the only option for mutated animals, a rather large list of animals was made available which could be mutated in a wide variety of ways (intelligence, human looks, functioning hands, bipedalism, etc.). Some animals allowed access to different varieties (most notably dog breeds), and rules allowed for the creation of new animals. Characters had access to psionic powers and could come from a wide variety of sources (e.g. natural mutation or man-made experiments), as well as a variety of educational backgrounds.

The mutant animal player characters in the game lived in our modern world, functioning on the fringes of human society. One of the more innovative details of the game was the alignment system which used terms like principled and miscreant along with a list of diagnostic behaviours such as "would kill an innocent bystander" or "would never accept stolen property". These hypothetical behaviours pegged a character as fitting one of the particular alignment terms.

Other interesting new continuous characters include:

Hollywood has five villains in The Ratt Pak.

The original TMNT game partially mirrored the universe of the TMNT comic books, including statistics for the Turtles, The Shredder, and other characters from early in the series. However, the adventures included with the book were completely independent of the TMNT universe, and brand-new characters were also introduced.

According to Kevin Siembieda, the 1987 TV series and live-action movies, which made considerable changes to the Turtles' universe, had a severe negative impact upon the popularity of the role-playing game. In an interview, Siembieda claimed depictions of the Turtles in other media made the Turtles seem so childish that "no self-respecting teenager, even if he thought the Turtles were cool, or thought the Ninja Turtle game was cool, was going to be caught dead playing it. So our sales plummeted from 50,000 copies in a year to 12,000, and the next year that dropped to 6,000."

In January 1986, Teenage Mutant Ninja Turtles & Other Strangeness spawned a game with a future post-apocalyptic Earth populated mainly with mutant animals and residual humans, called After the Bomb, which soon developed into a separate, though compatible game series. Despite fan protest, Palladium did not renew the TMNT license in 2000 due to the cost of the license as well as the 1987 TV series making the Turtles "too childish" and low pre-orders for the proposed second edition.

Palladium announced that a second edition of the game would be released in the fall of 1997. However, due to the cost of maintaining the license as well as delayed production and low pre-orders for the proposed title, Palladium decided to end its license with Mirage Studios in January 2000. Years later, in a February 2007 interview, Siembieda hinted that Palladium might consider re-licensing the property depending on the performance of the CGI movie and other factors,[1] but this prospect has not since been revisited.

The original edition of Teenage Mutant Ninja Turtles & Other Strangeness was published with a section detailing a comprehensive list of mental illnesses ostensibly drawn from the Diagnostic and Statistical Manual of Mental Disorders. Players could either select a form of insanity as an optional step in character creation or randomly assign one during the course of gameplay as a result of their characters undergoing some kind of trauma, such as demonic possession, near-death experience, or torture. This section also featured an extensive list of sexual deviations which included pedophilia and homosexuality (in terms of the game, a traumatic event could potentially induce a character to convert from one sexual orientation to another), despite the latter having been officially declassified as a mental illness more than a decade before. After parents of younger players objected to the list of sexual deviations – which had previously appeared in the Palladium Role-Playing Game and Heroes Unlimited rulebooks – Palladium Books covered it with a plain white sticker. Subsequent printings removed the list of mental illnesses entirely, although occasional references to it remained elsewhere in the book. Copies of the first edition sell for a premium on auction web sites like eBay.

Teenage Mutant Ninja Turtles Guide to the Universe (May 1987)

The Turtles were also featured on the cover of The Rifter, a Palladium source magazine. It featured some new artwork:

The Turtles, on one cover 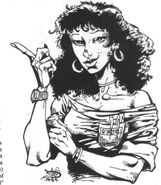