The Fugitoid is nervous. He has just knocked out Baxter Stockman in order to prevent the genocide of the last remaining Utroms. Fugitoid isn't convinced that Stockman's plan of killing all the Utroms to eliminate Krang's motivation will work, but now he has to refill the vials with ooze and the power is still down. Fugitoid stashes Stockman in a storage closet before seeking help from Krang himself. Krang, upon seeing Fugitoid walking about freely, immediately sets Traag and Granitor on him. Fugitoid tells Krang about the danger to the Utroms in stasis and Krang hears what he has to say. Fugitoid shows Krang the stasis room and tells him that somehow the ooze has leaked out, but the generator to get it online is outside in the storm. Krang tells him that he will face the storm to repair it.

In Dimension X, many years ago, Krang's ship enters Utrominon's orbit. Upon landing, Krang is greeted by Councilor Drexl, one of the newly instated councilors. Drexl escorts Krang through the city and attempts to tell him about the political happenings but Krang stops him. He tells Drexl that he's just there to witness the execution of the rebellion leader who was recently captured, then returning to the battlefront. Drexl tells Krang that his father Emperor Quanin had intended for Krang to accompany them to the Grand Concourse where a parade and games were being held in Krang's honor, but Krang is not concerned.

Krang heads to the detention center where the rebel leader is being held. The guard asks Krang if he can take him to him but Krang tells him that he instead wants to see the deposed Ruling Council. A short while later, Krang arrives at the Grand Concourse where the parade is being held. Krang orders everyone out of the viewing booth so that he can speak with his father privately. Krang tells his father that he spoke with Councilor Lorqa, and Lorqa told him of his father's depletion of their planet's natural resources, how their homeworld is dying while Quanin builds new palaces and erects new statues. Quanin does not want to hear anything Krang has to say, and instead tells Krang that he is a newly appointed member of the Royal Council. Krang tells his father that him serving on the council is ludicrous, and he intends to return to the front line to help end the war. Quanin tells his son that the war will never end, and the ceaseless expansion of their empire will be their defining feature, their legacy. Before Quanin can say anymore he is interrupted by Drexl, he informs him that Zog has escaped his cell in the detention center.

Krang, Quanin, and Drexl take a short flight to the detention center and witness Zog tearing his way through the guards as they land. Zog, spotting Krang, makes a beeline for him and manages to take him hostage.

On Burnow Island, present day, Krang takes a look at the power breaker that has shorted out due to the hurricane. Fugitoid guides him through what he needs to do to repair it, but before Fugitoid can finish giving him the information, their connection is lost. That's because Stockman has escaped and sicced one of his flyborgs on the Fugitoid. Stockman reveals that he never trusted the Fugitoid, and had planned to frame him for the murder of the Utroms. When the Fugitoid had worked for Stockman, as Chet Allen, he had thought Stockman was amoral. Now however he sees that Stockman is undeniably evil. Fugitoid is forced to wrestle with Stockman's flyborg. Fugitoid manages to break free, grab a gun left by a guard, and shoot the flyborg. Fugitoid tells Stockman not to follow him and he leaves.

In Northampton, Donnie is impressed by what he reads in the Fugitoid's work journal. Don realizes Fugitoid is practically its creator, having designed most of it from the ground up. Don excitedly shows schematics for its self-destruct sequence to Raph and Mikey, who are sparring. Mikey, distracted by Donnie, gets a punch square in the face. Raph points out that even though they now have some idea of how to shut down the Technodrome, they have no way to get to Burnow Island to do so. Donnie tells him he will come up with a plan, eventually.

On Burnow Island, Krang is nearly finished with the power breaker repairs. Just as he connects the final two wires, a jolt of electricity throws him backwards, his mechanical body shorted out.

In the past, on Utrominon, Zog orders the Utroms to lower their weapons, or he will kill Krang. Krang, unperturbed, tells him to do it. Quanin however cannot hold out and orders his men to surrender. Zog commandeers the Utrom ship and orders the pilot to take them up. Zog tells Krang that it's not too late for the Utroms. Krang tells him that it is too late for him and the Triceratons, that they will never win their war. Zog tells Krang that they don't have to win, just outlast his father. With that, Zog drops Krang to the ground and escapes in the ship.

Krang wakes up in a hospital bed. His father tells him that they found the ship Zog commandeered, the pilot dead. Krang asks Quanin how he could have let this happen, telling him that if they had executed Zog like Krang wanted then the rebellion would have been seriously demoralized and their victory would be that much nearer. Quanin tells him that there was nothing he could have done, because Zog was threatening his very legacy, his heir, his only son. Krang tells him that the Utrom race is a whole is more important than their family, that he should have let him. Krang tells his father that he would sacrifice anything for the preservation of their race.

On Burnow Island, present day, Krang struggles to his feet, but is knocked down a cliff by the strong winds of the storm.

Cover Subscription by Nick Pitarra.
Add a photo to this gallery 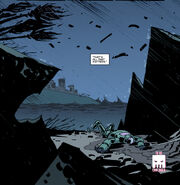 Retrieved from "https://turtlepedia.fandom.com/wiki/Teenage_Mutant_Ninja_Turtles:_Utrom_Empire_issue_2?oldid=429029"
Community content is available under CC-BY-SA unless otherwise noted.