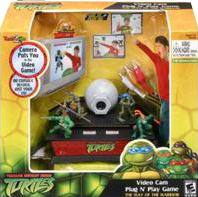 The player is placed in a cityscape where he or she must attack Purple Dragon members before they strike first. In addition, the Ninja Turtles, Casey Jones, or April O'Neil may appear; striking one of them leads to losing a Heart (life).

A 1-on-1 brawl against Shredder, similar to a versus fighting game. Players can attack Shredder or guard against his attacks, and he can do the same towards the player.

Splinter has the player break boards with your hands. Missing a board causes you to lose a Heart. This game is erroneously titled "Ninja Forms" on the game's packaging.

Fist of the Foot

Foot Ninja approach the player from all angles, and they must strike them before being attacked, him or herself.

Similar to the Fist of the Foot game, only the player is defending the Turtles from Mousers, rather than him or herself from the Foot.

Retrieved from "https://turtlepedia.fandom.com/wiki/Teenage_Mutant_Ninja_Turtles:_The_Way_of_the_Warrior?oldid=157252"
Community content is available under CC-BY-SA unless otherwise noted.