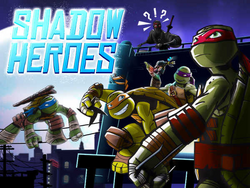 Teenage Mutant Ninja Turtles: Shadow Heroes is a stealth action-platformer game for internet browsers. It is loosely based on the episode "A Chinatown Ghost Story". April is kidnapped by Ho Chan, and the Turtles have to rescue her by sneaking across town. Along the way, they are plagued by Footbots, the Purple Dragons, and Ho Chan himself.

References to other characters

Retrieved from "https://turtlepedia.fandom.com/wiki/Teenage_Mutant_Ninja_Turtles:_Shadow_Heroes?oldid=551138"
Community content is available under CC-BY-SA unless otherwise noted.