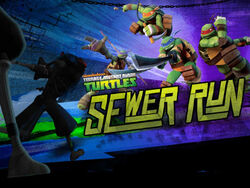 Every Turtle has their own special move (Leonardo can use his katana to break rocks, Donatello can use his bō staff to double-jump, Michelangelo can use his kusarigama as a grappling hook to swing around, and Raphael can use his sai to climb up walls). Each Turtle can only be used in one level, meaning that each of the four levels have to be beaten by one Turtle.