Principal photography on the film began on April 27, 2015, in New York City. It was released in theaters on June 3, 2016, in 3D, RealD 3D, 4DX, and in IMAX 3D. It received generally mixed reviews from critics, being considered by many an improvement over its previous one, but was not as successful as its predecessor, grossing $245 million against a $135 million budget.[3][4]

The Ninja Turtles come into conflict with T.C.R.I. scientist Dr. Baxter Stockman with the association of the Foot Clan and the return of the Shredder, who has hired Stockman to create mutants of their own in the form of Bebop and Rocksteady and an unknown invasion above New York City. To prevent the end of the world, the turtles and their human friends April O'Neil and Vern Fenwick must band together yet again, but this time, they'll be working with the street vigilante known as Casey Jones.

Two years after their battle with the Shredder and Eric Sacks, the Teenage Mutant Ninja Turtles still live in the shadows, having allowed Vern Fenwick to take the credit for Shredder's defeat. When Shredder is being transferred between prisons by corrections officer Casey Jones, his Foot Clan–operating under the direction of scientist Baxter Stockman–attack the convoy transporting him. The Turtles, tipped off to the escape attempt by April O'Neil, fend them off. Stockman is still able to affect Shredder's escape using a teleportation device, but Shredder is hijacked mid-teleport and winds up in another dimension. There, the alien warlord Krang gives him a mutagenic compound in exchange for his promise to find three components of a machine Krang sent to Earth in ages past, which when united will open a portal to his dimension.

Shredder recruits the two criminals that were being transported alongside him, Bebop and Rocksteady, and has Stockman use Krang's mutagen on them to transform them into powerful animal mutants. The snooping April witnesses their transformation, and is able to steal the vial of mutagen. Pursued by the Foot, she is unexpectedly saved by Casey. In the scuffle, the vial is lost and taken into police custody. Donatello deduces that the mutagen could be used to turn the Turtles into humans, enabling them to live normal lives above ground, but Leonardo refuses and insists that he keeps it as a secret from the others. However, Michelangelo overhears their conversation and tells Raphael. Raphael furiously confronts Leonardo for not telling them about the retro-mutagen and being honest with them, which results in Leonardo benching him and Mikey from the mission. Raph then recruits Mikey, April, Casey, and Vern to break into the NYPD police headquarters to recover the mutagen. But the Foot arrive ahead of them and in the ensuing battle, the Turtles' existence is revealed to the police, who react with fear and hatred. The brothers escape, but April and Casey are arrested.

With Shredder's forces having already recovered two of the pieces of the portal device, the Turtles track Bebop and Rocksteady where they have recovered the final piece from a jungle in Foz do Iguaçu at Brazil. The Turtles intercept their jet on its return journey via a plane-to-plane skydive, and although the resultant battle crashes the jet, Bebop and Rocksteady are still able to successfully escape with the final component. The Turtles return to New York just in time to watch as Stockman and Shredder complete the portal device and open the gateway to Krang's dimension, through which his modular war machine, the Technodrome, begins to emerge. Shredder betrays Stockman and has his men take him away, but upon entering the Technodrome, Krang betrays Shredder, freezing him and locking him away with his collection of other defeated foes.

The Turtles see no way to combat the threat from the shadows and must decide whether or not to take the mutagen and become humans in order to fight openly. Leonardo finally agrees to do as his brothers wish, but Raphael shatters the vial, realizing that they must accept who and what they are. Vern recovers security footage that proves Stockman and Shredder's crimes and secures April and Casey's release, allowing them to facilitate a meeting between the Turtles and police chief Rebecca Vincent. With the acceptance and blessing of the police, the Turtles go into action, confronting Krang aboard the still-assembling Technodrome. Meanwhile, Casey keeps Bebop and Rocksteady busy while April and Vern defeat Shredder's lieutenant Karai and take control of the portal device. Once the Turtles locate the beacon around which the Technodrome is assembling, they hurl it back through the portal, taking Krang and the rest of the Technodrome with it, and April, Casey, and Vern shut the portal down, ultimately defeating the alien, but not before Krang swears he will return for revenge.

In the aftermath Bebop and Rocksteady are back in custody, Stockman remains at large and the Turtles are honored by Vincent and the NYPD, but elect to keep their existence a secret from the public at large, deciding that being normal isn't nearly as fun as being a turtle...

After the 2014 film exceeded box office expectations, Paramount and Nickelodeon officially announced a sequel was greenlit, and due to be released in theatres on June 3, 2016,[7] with plans to incorporate the characters of Casey Jones, Bebop and Rocksteady.[8] Jonathan Liebesman and Brad Fuller were also interested in doing a storyline that involved Dimension X.[9]

In December 2014, it was revealed Paramount was in early negotiations with Earth to Echo director Dave Green to helm the sequel, also revealing Jonathan Liebesman was no longer apart of the project.[10] Megan Fox and Will Arnett were confirmed to be returning as April O'Neil and Vern Fenwick respectively, as well as the Shredder returning and Bebop and Rocksteady debuting in the movie.[11] In an interview, William Fichtner indicated he would likely be returning as Eric Sacks for the sequel.[12] Production was confirmed to start in April 2015,[13] along with the castings of Alessandra Ambrosio and several members of the Los Angeles Clippers.[14][15] On March 31, Stephen Amell was cast as Casey Jones, after test reading alongside several different actors.[16] Amell briefly discussed the role, acknowledging the character bore similarities to his Oliver Queen character from Arrow. He stated the characters are "fundamentally different" from one another, but that Jones did resemble Queen from older versions.[17] On April 23, Tyler Perry was cast as Baxter Stockman, a scientist.[18] On April 27, Brian Tee joined the cast as Shredder.[19] On April 30, Laura Linney was cast in an unspecified role[6] and UFC fighter CM Punk revealed he had auditioned for a role in the film.[20] On May 14th, Gary Anthony Williams had been cast as Bebop,[5] where on May 28th, Irish Wrestler Sheamus was confirmed to play Rocksteady.[21] On May 27th, Minae Noji was re-casted by Brittany Ishibashi as Karai.[22] In August 2015, former WWE superstar CM Punk revealed that he lost the role of Rocksteady to Sheamus.[23]

Teenage Mutant Ninja Turtles 2: Out of the Shadows was released on digital download on September 6, 2016 and on Blu-ray, Blu-ray 3D, 4K Blu-ray, DVD and Digital HD on September 20, 2016, making it the first Nickelodeon movie to get a 4K Blu-ray release.

Concept art of Bebop and Rocksteady was shown at Paramount Pictures’ CinemaCon panel on April 22, 2015.[32] A 14-second teaser of the trailer was released by Stephen Amell on December 9, 2015.[33] The full trailer debuted the following day.[34][35]

Noel Fisher revealed in an interview that all four of the turtle actors have signed on for three films.[36] Tyler Perry has said that if a third film is to be made, his character, Baxter Stockman, would probably mutate into his fly form during the movie. Pete Ploszek has also expressed his interests in reprising his role in a third film as Leonardo. On October 29, 2016, producer Andrew Form indicated that no plans were currently underway for a third film.

On June 20, 2018, it was reported that Paramount Pictures will once again reboot the series with Bay, Fuller, and Form returning to produce the film with Andrew Form to write the script. 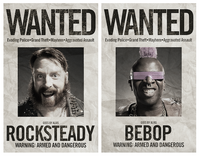 Add a photo to this gallery
iiVideos

Start a Discussion Discussions about Teenage Mutant Ninja Turtles: Out of the Shadows (film)