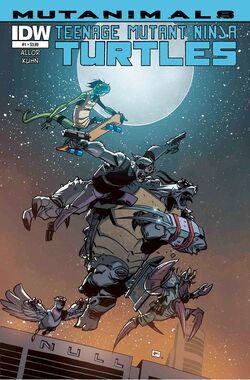 Lindsey and Pete are unloaded at a laboratory owned by the Null Group, a large scientific conglomerate that does some of everything. Lindsey and Pete are greeted by Jillian Amante, Lindsey's former co-worker and ex-girlfriend. Jillian pleads with Lindsey not to be mad. Jillian had become aware of Lindsey're unusual employment situation and so wanted to show her the new lab and offer her a job. Lindsey is understandably upset at being kidnapped for a job yet again. Jillian assures Lindsey that her men will return Pete to where they picked him up, no harm done, while she and Lindsey tour the lab. Secretly, however, Jillian orders her men to take Pete to the rail yard. Lindsey asks Jillian how she found herself in her current position; Jillian explains that she got a job with a subsidary of the Null Group, and they managed to successfully create some mutants but are now trying to combine mutant DNAs. Lindsey, excited by the prospect of new areas of research, asks to see some of their mutants but Jillian tells her they're not kept on-site. Lindsey asks Jillian where they got their mutagen, since it is in such short supply, with stores no longer at StockGen, only on Burnow Island and with the Foot Clan. Jillian explains that it was in fact the Foot Clan who outsourced their mutant research to the Null Group. Lindsey balks at the thought of working for the Foot Clan, but Jillian points out that she's currently working for mutant terrorists. Jillian goes on, stating that she doesn't concern herself with the politics of her predicament, only her job duties and her salary. Jillian urges Lindsey to accept her job offer but Lindsey explains that their personalities don't really mesh well together, hence their ended relationship.

Hob warns Null.
Add a photo to this gallery
Retrieved from "https://turtlepedia.fandom.com/wiki/Teenage_Mutant_Ninja_Turtles:_Mutanimals?oldid=225668"
Community content is available under CC-BY-SA unless otherwise noted.