April has been kidnapped once again by the Shredder, Krang and cohorts, and Leonardo, Michelangelo, Raphael, and Donatello set out to rescue her from their enemies' clutches. The chase leads them through the sewers and the streets of New York City, the river, and then the Technodrome.

The game's design is oriented on the 1987 TV series. It was released in 1990 by Konami and is a rather simple jump and run platforming-style game.

At the start of the game, the controls can be altered to suit the player, either jumping with the A button and attacking with the B button, or vice versa. Attacking while in a crouching position causes the player's character to throw a shuriken, while attacking in midair causes him to jump-kick.

The player takes control one of the Turtles through a total of five stages, battling Krang and Shredder's minions along the way. Enemies include Foot Soldiers, Mousers and Roadkill Rodney among others. If a Turtle runs out of health, he is captured and the player must select another Turtle to pick up where he left off. If all four Turtles are captured, the game is over. One can recover a captured Turtle, as well as regain lost health, by winning the hidden mini-games scattered throughout each stage. The player can also recover health by finding pizza, which is located in certain locations or dropped by defeated enemies. There are a total of five stages, each with a unique end-boss.

The player can choose which stage to start the game on, but the game needs to be completed from Stage 1 to see the full ending. 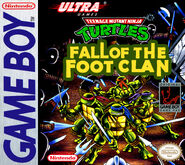 Add a photo to this gallery
Retrieved from "https://turtlepedia.fandom.com/wiki/Teenage_Mutant_Ninja_Turtles:_Fall_of_the_Foot_Clan?oldid=517112"
Community content is available under CC-BY-SA unless otherwise noted.