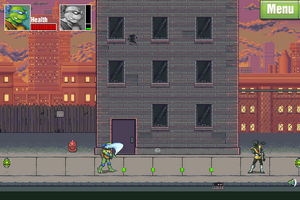 The game uses more 1987/2007-esque appearances for the Turtles, but most other characters take after their 2003 counterparts.

Each Turtle has his advantages. Leonardo and Raphael are more effective in fighting Foot Ninja, while Donatello and Michelangelo are efficient in battling machines/robots. Leo and Don have long-range weapons, and Mike and Raph have stronger weapons.

After choosing his or her Turtle, the player is able to choose a support character from the four Turtles, a "Pizza Delivery Guy", Splinter, and Casey Jones.

Retrieved from "https://turtlepedia.fandom.com/wiki/Teenage_Mutant_Ninja_Turtles:_Double_Damage?oldid=157247"
Community content is available under CC-BY-SA unless otherwise noted.