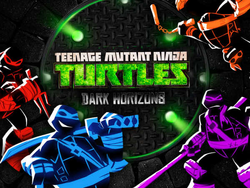 Teenage Mutant Ninja Turtles: Dark Horizons is a free-to-play browser-based action game, and the first game to be based on the Nickelodeon versions of the characters. The game, released in June 2012, sports a unique aesthetic that renders the characters as shadows with neon details.

The game involves the Ninja Turtles finding a trail of Mutagen in the Sewer, and following it to find the mutations it created. Leatherhead acts as the game's final boss.