TMNT: Casey & April is a miniseries in the IDW continuity by IDW Publishing. The miniseries focuses on Casey and April traveling to the American Southwest in an attempt to learn more about the mysterious Pantheon of deities that have been using the Turtles, their allies, and their foes in a grand chess game for control of Earth, all while working out where their relationship is headed.

Casey and April leave New York City in April’s van. On the radio they hear a news report about Dr. Miller’s murder. Eventually, they make it to the Southwest. They briefly discuss the apparent growing distance between them.

Later on they stop the car for some reason and get out to read the scroll. April explains that she thinks it refers to the land bridge between Asia and North America thousands of years ago, and that there are pictures in the scroll that indicate its companion scroll is in an area with yucca trees, so they must be close. Casey picks up a heart-shaped rock and April explains the finer points of the geography around the San Andreas fault. Casey says he’s hungry.

Back in the van, April tells Casey about a childhood trip to the Grand Canyon. She tells him how she made star charts that her dad would correct the next morning. Casey is startled by a cyclist crossing the street. Casey tells April about how growing up in the city with a lot of light pollution, he never saw a star until he was twelve, but then it just turned out to be the lights on an airplane. The two discuss how if they’d met as children, they would have been so different they might as well have been from different worlds.

Casey and April stop at a diner to get some food. Two of the locals at the bar have a serious problem with them being from New York. One of the men makes fun of Casey for having the same name as a Grateful Dead song and the two exchange some fighting words. Casey fights the two men and April tells him they need to leave before the locals call the police. Driving away in the van, April is upset that Casey got into a fight. The two argue all the way to a gas station where they stop to refuel. April states that the location of the next scroll seems to be near an armory in the area.

As they drive away an old man in a truck rear-ends them. April is very apologetic and the man explains that it's fine, but he’s worried that he will now be late to meet his sister and she may begin to worry. As she doesn’t have any type of phone, April offers to drive to her house and tell her what happened while the man fixes his truck. The man offers his motorcycle to Casey to use to continue on his way, so after April and Casey exchange heated words Casey heads off to check out the armory. As he and April each leave, Casey throws the heart-shaped rock he had picked up earlier. The old man picks it up. It turns out he’s the Rat King.

April drives towards the old man’s sister’s house, contemplating the strange predicament she’s in and the uncomfortable state of her and Casey’s relationship. Meanwhile, Casey arrives at the site of the armory and is confused to see nothing but a thick tangle of thorn bushes. He thinks back to he and April’s most recent fight and gets mad, kicking the old man’s motorcycle. Suddenly he hears a panicked scream and grabs a piece of wood to use as a weapon.

April has stopped to help a woman change the flat tire on her car. The woman asks her to watch her two children while she changes the flat. April remarks on how smart her daughters are and then proceeds to vent to the woman about the complicated state of her life.

Casey fights through the thorn bushes to get to the source of the scream, which just turns out to be a group of men doing yoga and chanting around a guy playing the bongos. The group finishes up and the instructor walks over to greet Casey.  The instructor explains that there isn’t an armory any more, and that now the site is the Broken Sword Spiritual Healing Center for Men. A man offers Casey a glass of orange-pomegranate juice and Casey flips out on her. The instructor tells Casey that it seems like he could benefit from some of the services they offer, especially their anger management class. Casey storms off angrily.

April calls Casey but their cell reception is weak and the two have an awkward conversation, cut short by April as she finally finds the old man’s sister’s trailer. Casey is angry as he has no cell service and cannot call April back. Casey drives back to the gas station but is surprised to see that it is years older than when they were there last just an hour earlier.  A rat jumps out of one of the derelict gas pumps. Casey realizes that the whole thing is a trap of some kind and tries to call April again. The motorcycle is now old as well so he begins running down the road in the direction April went.

At the woman’s trailer, April knocks on the door, saying she has a message from the woman’s brother. She thought she had a call on her phone but she really didn’t. She enters the trailer and is surprised to see an old fashioned Japanese style dwelling. The door slams shut behind her, trapping her. Outside, the Rat King wonders if he has time to get some barbecue.

Inside the mysterious trailer, April finds herself in a maze. She begins trying to find her way.

Over a plate of barbecue ribs, the Rat King explains to his sister how he has trapped April within a maze, much like the famed labyrinth of Ancient Greece. The Rat King tells his sister how sacrifices were forced inside to try and navigate it, much like rats in a maze.

Casey, running in circles trying to get a signal on his cell phone while being chased by rats, runs into the wall of the gas station. Suddenly he is no longer at the gas station but outside the mysterious trailer April went to.

Inside the maze, April is frustrated by her failure to map out the maze as it does not seem to be spatially consistent. She thinks back to a time when she put way too much work into an assignment for school but her dad made her feel better. She vows not to give up, and as she touches a hand to the wall of the maze she is startled that it goes through, and she falls forward into darkness.

Casey enters the trailer and falls into the maze. He is confused and begins to run.

The Rat King continues speaking to his sister, explaining that the deadliest part of the maze was the beast it was built to contain. The Rat King’s sister urges him to get to the point. He asks her what her interest was in the great game they and their siblings played, and she tells him she was interested in the capacity of the human spirit to overcome adversity.

Inside the maze, Casey is haunted by memories of his possession by Chi-You, as well as his alcoholic father and the beatings he suffered at his hands. Casey sees a vision of his younger self and attempts to reach out but the vision attacks him and then flees. Casey chases after him.

April manages to climb out of the void and back onto the floor of the maze. She notices a mysterious sign on the floor that says “The Only Way Out is In”. Suddenly she hears Casey yelling. April peers through the insubstantial wall of the maze and spies Casey running towards a ledge and a narrow walkway of stones. Casey begins to walk out towards April. The two apologize to each other for how they acted earlier. The stones Casey is walking on begin to crumble and April runs out to meet him. Trapped in the middle of the void with nowhere left to go, April suggests they jump down into the unknown because of the movie Thelma & Louise. The two leap into the darkness.

April and Casey land on the floor of the mysterious trailer and are greeted by the Rat King.

Before April and Casey left New York to hunt for the second scroll, Leonardo told April that he had a strange feeling that something was going to happen. Currently, April and Casey follow the Rat King. He tells them that they are between worlds, in a liminal space. Casey asks if this is real and the Rat King taunts them, transforming into the old man from the gas station and back. April asks just who he is and the Rat King explains that he has been acting behind the scenes and creating chaos for many years. The group arrives at the Rat King’s sister’s home and she greets them in her stylish living room. The woman conjures up a spread of pizza, soda, and snacks for April and Casey to dine on. April and Casey excuse themselves to speak in private.

Outside the woman’s living room, Casey tells April that he has a bad feeling about what’s going on, but April tells Casey that she thinks this woman is the reason they’re there. Casey agrees to follow April’s gut instinct. The two sit down with the woman and explain that they found the scroll that lead them there. The woman introduces herself as Aka, one of a family of shape-shifting immortals who once ruled the world. She explains that long ago her family began to fight amongst themselves. Aka and the Rat King explain that as humans spread across the land, their power waned and they went into seclusion, emerging only seldomly to influence history. Rat King asks Casey about their friends the Turtles and Casey angrily tells him to show some respect. The Rat King urges Casey to remember his place and turns into a dragon made of rats.

Aka stops time so that she and April may speak. She explains that the Rat King is merely a trickster driven by curiosity and assures April that Casey will be fine. Aka leads April to a yucca tree and tells her that her brothers and sisters, the Pantheon, are gathering strength for a coming revolution. Aka talks about the nature of change and the many different forms it comes in.

Aka tells April that she believes that April is an agent of change and will play a part in the coming war. With a flash, April is back outside the trailer. She calls Casey, who is back at the rundown gas station. The two incredulously agree that they just met what could be called gods. After meeting back up and getting back on the road, Casey receives a call from a concerned Leo, who had been unable to reach either of them. Casey tells Leo that they just met the Rat King and his sister Aka and that they may have more insight into the things that have been happening. Casey agrees to call Leo from a hotel later. As they resume driving, April and Casey resolve to work harder on their relationship. 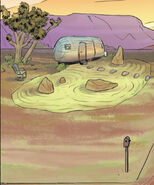 Add a photo to this gallery
Retrieved from "https://turtlepedia.fandom.com/wiki/Teenage_Mutant_Ninja_Turtles:_Casey_%26_April?oldid=470440"
Community content is available under CC-BY-SA unless otherwise noted.