Several hours have passed since Peter used the proton missile to temporarily subdue Chi-You. The Turtles and the Ghostbusters are in the midst of preparing themselves to face Chi-You again, for what they hope will be their final encounter. Egon and Donatello are making progress towards completing a new working teleporter while April, Ray, and Kylie engineer an EMP-type blast to sever Chi-You’s hold over his thralls. Meanwhile, Winston, Peter, Leonardo, Michelangelo, and Raphael pass the time waiting. Winston admires the balance on Leo’s katana while Mikey tries on one of the Ghostbuster uniforms when suddenly the Ghostbusters’ proximity alarm goes off, indicating there’s a nearby paranormal threat. Mikey looks outside and sees that Chi-You’s thralls are swarming the building. Downstairs, the thralls have already broken down the garage door and entered the building. While the others rush to complete the EMP blast, Leo, Raph, and Mikey take on the thralls using the modified proton packs. Peter and Janine assist the Turtles by corralling the thralls using their standard proton packs.

Back upstairs, Ray puts the finishing touches on the EMP device, but before he, April, and Kylie can activate it the power goes out and Chi-You materializes, incapacitating the three of them. However while Chi-You is busy monologuing them, Casey steps in and activates the EMP, freeing all the thralls from Chi-You’s control, returning them to their normal human forms. In the basement, Donnie and Egon wonder what’s going on upstairs while they hurry to complete the teleporter, as the Turtles’ window to get back to their own dimension is shrinking fast. Unfortunately, due to Chi-You’s influence the Ghostbusters’ containment grid is destabilized and Egon has to rush to correct it before an explosion occurs.

Chi-You vents his frustration at the Turtles, Ghostbusters, and their friends for trying to stop him, and gets angry when he realizes the power flowing to him through his thralls has been cut off. Chi-You begins throwing Casey and the others around, until Peter and Winston appear in the doorway and restrain him with their proton packs. However, as there is so little room to maneuver while still keeping a hold of Chi-You, neither can move to throw out the trap and capture him. Leo uses his ninja skills to throw the trap directly under Chi-You and activates it, and Chi-You begins to be pulled inside. However even in his weakened state Chi-You is immensely powerful and he tugs on Winston’s proton stream, causing him to be in danger of getting sucked into the trap as well. Peter tells Leo to shut off the trap before it’s too late. Meanwhile, Egon hurriedly calculates how to stabilize the extreme drain on the containment unit’s power grid caused by the teleporter powering on. Egon begins to guide Donnie through the process of rerouting power to control the situation and prevent a catastrophe.

Upstairs in the dark, Mikey asks Peter if Chi-You has been captured. Chi-You himself answers, through Winston’s body which he is possessing. Ray tries to hit Winston/Chi-You with some mood slime, the substance the Ghostbusters keep on hand to counter the side-effects of possession by malevolent entities.  Chi-You, regaining strength, transforms Winston into a bull-headed monstrosity, changing his proton pack into a suitable weapon for himself. Mikey tries to take on Chi-You but Chi-You easily knocks him aside. April and Kylie tend to Ray, who was knocked unconscious by Chi-You.  Mikey asks Peter if they have anymore mood slime to use on Chi-You and Peter tells him that there’s a tank stashed in the back of their car.

Leo and Raph tag-team Chi-You but despite their best efforts they make no headway. Leo and Raph are almost down for the count when Mikey returns and blasts Chi-You with mood slime, allowing Winston to begin to break free. Raph lunges forward for the finishing blow but Chi-You laughs at the feeble attempt. Leo, coming from behind, points out that it was merely a ninja distraction technique and tags Chi-You/Winston with the modified proton pack, separating the two. Peter, seeing the opening, throws out the trap and captures Chi-You. Everyone momentarily rejoices at their joint victory before they remember the limited amount of time they have to get the Turtles back home. Luckily, Egon and Donnie have finished the teleporter and a short while later it sits ready to send the Turtles to their own dimension. Winston thanks Leo by giving him a good luck charm and a Marine salute. Leo says it was an honor and bows.

Egon, ever the practical one, reminds everyone of the ticking clock. The Turtles, April, and Casey depart, saying goodbye to the Ghostbusters. Back in their hideout in their own dimension, Master Splinter is surprised by the sudden appearance of his sons and their friends. In their own dimension, the Ghostbusters decide what to do with the trap containing Chi-You. Peter asks who wants to do the honors and transfer Chi-You into the containment unit but Winston instead tells Egon to set the teleporter coordinates for “the edge of the universe or somethin’” and tosses it through.

Near Proxima Centauri, a star 4.2 light years away from the Earth of the Turtles’ dimension, the trap pops back into existence having come through the teleporter. Inside, Chi-You once again senses the presence of his family, the Pantheon, and bides his time.

Cover RE Hot Topic by Adam Gorham.
Add a photo to this gallery 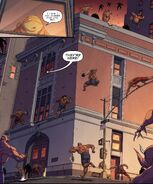 Retrieved from "https://turtlepedia.fandom.com/wiki/Teenage_Mutant_Ninja_Turtles/Ghostbusters_issue_4?oldid=429311"
Community content is available under CC-BY-SA unless otherwise noted.