The Turtles and the Ghostbusters are en route to the hockey rink in their custom RV, siren blaring. Inside, Mikey eagerly exclaims his desire for one. As they get nearer, Ray says he's getting hot readings from inside. Don rushes in with the spare proton pack and sees Chi-You turning a hockey player into a monster. Chi-You orders his thralls to attack and Don fires the proton pack but his aim is off. Raph chides Don but Pete tells him not to sweat it. He explains that the proton packs work more like firehouses than guns, and to plant his feet and go easy on the trigger. Leo starts fighting the thralls while Ray informs Don to be sure he doesn't cross the streams. As Mikey and the other Turtles fight the thralls, he realizes that Chi-You is moving slower than during their last encounter, likely because transforming the hockey players took a lot out of him. Chi-You taunts the Ghostbusters, saying their proton packs are ineffective, when Winston sneaks up behind him and springs a trap. Chi-You is pulled towards it, but not all the way into the trap, to the Ghosbusters' confusion. Don and Ray realize that Chi-You is connected to the earthly realm by his thralls. Casey, still under Chi-You's power, tries to fight off Winston, but he manages to explain to them that they'll have to break Chi-You's connection to his thralls. Casey manages to subdue Winston and deactivate the trap, and Chi-You and his thralls make their escape. As he leaves, Chi-You tells them they will regret their next meeting.

Back at Ghostbusters' HQ, Raph is furious that Chi-You escaped with Casey again. Egon says that until they have a way to sever Chi-You's tie to his thralls, hunting him down again is pointless. Kylie brings up some bird-like ghosts they defeated recently and wonders if they could beat Chi-You and his thralls in the same way. Egon says it's unlikely, but Don hypothesizes that they could convert the Ghostbusters' proton packs to work like a pulse rather than a stream, breaking the connection. Don, Ray, and Egon begin sketching schematics. Egon reminds them all that they still have to keep in mind the Turtles' shrinking window of opportunity to get him. Egon suggests the other Turtles try to get some rest while he, Ray, and Don work on a prototype.

Some hours later, in Chinatown, Chi-You interrogates Casey. Chi-You asks how it is possible that Casey is so adept at fighting his control. Casey says he's just a natural-born fighter. Chi-You realizes that Casey is trying to anger him on purpose, because when Chi-You is angry he acts illogically. Chi-You swallows Casey whole.

At the Ghostbusters' firehouse, Janine receives a call from Chinatown which seems to be relevant to their dealings with Chi-You. Luckily, Egon has successfully modified some of the hand-mounted proton packs so that if they can manage to touch one of Chi-You's thralls in the chest it'll sever the connection. Leo says Don and Ray should stay at the firehouse with Egon to work on the transporter while he, Mike, and Raph head out to deal with Chi-You and his thralls and get Casey back.

In Chinatown, Chi-You is tearing up the street. Winston and Pete hit him with their proton beams but he is unfazed and yanks them around. Leo, Mike, and Raph ready themselves to deal with the thralls but Raph is concerned because he doesn't see Casey. Raph loses his temper and charges at Chi-You, but Chi-You knocks him aside. Mikey manages to hit one of the thralls in the chest, turning him back into a human. Realizing his weakness, Chi-You orders his thralls to retreat. Chi-You retches, and Casey emerges, covered in black ooze and decked out in armor and wielding a scythe. Chi-You orders him to kill Leo, Mike, and Raph, as they do not have the power necessary to help him travel to other worlds. Raph fights with Casey, urging him to fight Chi-You's influence. Chi-You watches them fight, having forgotten Peter and Winston, and Peter comes up with an idea. Peter gets Chi-You's attention and hits him with a proton blast from a missile launcher, dissipating him for the time being, giving Raph the chance to hit Casey in the chest with the hand-mounted proton pack, breaking Chi-You's hold on him.

Later, back at the firehouse, Egon finishes doing a check-up on Casey. Egon says that everything appears normal, but Casey may be susceptible to mood swings in the future. Casey apologizes to Raph for kicking his butt, but Raph tells him he's crazy if he thinks he kicked his butt. Raph and April go to find the others eating pineapple Sriracha pizza while Mikey tells Don, Ray, and Egon, about their latest encounter with Chi-You and his thralls. Raph says that the next time they see the thralls, they'll finish the job of freeing them. Winston tells him the Turtles don't have to worry about the thralls anymore, that now they've got Casey back they can focus on getting home. Leo says they won't leave until the job is done, since they're the reason Chi-You was let loose in the Ghosbusters' dimension. Don theorizes that it'd be easier to use an EMP-type device to interrupt Chi-You's connection to his thralls, rather than tagging them each individually. Egon asks April to work on building the EMP device with Ray while he and Don work on the teleporter.

Back in Chinatown, Chi-You finally re-materializes. Chi-You decides that he can no longer ignore the Turtles or the Ghostbusters while he attempts to build an army, he and his thralls must go to war.

Cover RE Hot Topic by Adam Gorham.
Add a photo to this gallery 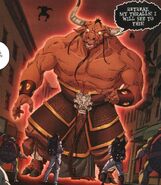 Retrieved from "https://turtlepedia.fandom.com/wiki/Teenage_Mutant_Ninja_Turtles/Ghostbusters_issue_3?oldid=429270"
Community content is available under CC-BY-SA unless otherwise noted.