Not to be confused with Teenage Mutant Ninja Turtles/Ghostbusters 2.

The Ghostbusters open fire on Chi-You with their proton packs. Chi-You, enraged, asks his thralls who these mortals are and they tell him they're the Ghostbusters. Realizing they could potentially trap him, Chi-You and his thralls retreat. Egon remarks that its strange that Chi-You left behind his "anthropomorphic turtle constructs" behind and shoot at them as well. As his teammates postulate on the nature of the Turtles, Winston decides they're not a threat and approaches them to make contact. April seizes the opportunity to tear into Peter, asking him why on Earth they were shooting at them and let Chi-You get away. Hearing the name Chi-You, Ray recognizes it as the name of an ancient Chinese war god. Egon examines them and realizes that April and the Turtles are all emitting a low-level phase variance at the cellular level, indicating that they're out of sync with the Ghostbusters' dimension, which explains the dimensional breach that Kylie warned them about. Don is excited at the prospect of examining the Ghostbusters' equipment but Raph tells them they need to hurry up and find Casey. Don tells him to think things through and that the Ghostbusters are likely their best bet for tracking him down. Ray tells him they'd be happy to help, as well as learn more about the Turtles. Ray asks if they're aliens, but Don tells him they're just mutants who encountered an unknown variable while testing an inter-spatial teleportation unit. Don shows the teleporter schematics to Ray and Egon, who are quite impressed. Realizing they still haven't formally introduced themselves, April and Peter handle introductions for the group. Since the whole group won't fit in Ecto-1, the Ghostbusters give April and the Turtles the address of their headquarters and meet them there.

Nearby, Chi-You decides that since he cannot sense any of his family, their contract to only influence the world indirectly is "null and void." Chi-You outlines his plan to impose order on the world, then have the Turtles build another teleporter so that he can conquer other dimension. Realizing the people he possessed at the wedding are unsuitable for building an army, he frees them of his bond and lets them flee. Casey, however, he keeps enthralled, even as Casey attempts to break free from Chi-You's power. Chi-You tells Casey he will lead him to more suitable individuals with which to build his army.

At the Ghostbusters' headquarters, Don geeks out at the sight of all their equipment while Mikey antagonizes Slimer. While examining some of the Ghostbusters' devices, Don asks them about their line of work, saying that the existence of autonomous spirits is preposterous. Egon and Ray tell him that they do indeed exist, and ignoring evidence to the contrary is illogical. While they debate, Raph and Peter bond over their disdain for the eggheads. Ray asks Don what he thinks he saw if it wasn't a ghost; Don says it could have been some kind of parasitic entity, possibly extraterrestrial. Egon says that aliens don't exist but Don tells him he and his brothers have met some; Egon retaliates that he and his coworkers have met ghosts. Watching the others, Leo asks Winston if he's the leader, judging by his calm and reasonable demeanor, and the two bond over their shared roles on their respective teams. In the kitchen, Janine comforts April, who is understandably shaken by the experience. Kylie barges in with an immense stack of books containing possible leads on Chi-You. April asks why they can't do research on the internet, and Kylie and Ray explain that with occult information, trouble can be caused by providing too much access. Ray takes Don down to the basement to show him the containment unit, on the way saying he understands Don's skepticism. Ray asks him if the circumstances that lead to their being there are any less fantastic than the existence of an afterlife or ghosts. Ray explains that all life is merely energy, and after dying our energy merely travels elsewhere.

In Midtown, a New York Ranger and a Montreal Canadian beat each other up during a hockey game. Suddenly the two players think they're hallucinating, but in fact Chi-You is attacking the hockey rink. A man attempts to call 911 to report the incident but Chi-You stops him. Chi-You begins transforming the hockey players into hideous monsters, the beginnings of his army. Casey asks Chi-You why he doesn't transform him; Chi-You tells him he's going to use Casey as an incentive to get the Turtles to give him the technology to travel to other dimensions.

At the Ghosbusters' headquarters, Ray is showing Don the containment unit that they put their ghosts in. Ray says that based on Don's teleporter schematics, he thinks they can build a replacement for the Turtles to use to get home. Janine alerts the two teams to a call from the police department, alerting them to a ghost attack at the ice hockey playoffs. The Turtles and the Ghostbusters correctly guess that its Chi-You and Casey and prepare to head out. Egon suggests that the Turtles time would be better spent at the Ghostbusters' firehouse building the replacement teleporter, but Leo says not all of his brothers are mechanically inclined but they do want to help their friend. Egon clarifies, stating that based on the readings he got off the Turtles, they only have 72 hours to teleport back to their own dimension before their window of opportunity will close. Don tells Ray that it took them weeks to build their first teleporter, but they still can't sit idly by while their friend is in trouble. Ray goes to his locker and gets Don a spare proton pack before they head out.

Cover 2nd Printing by Dan Schoening.
Add a photo to this gallery 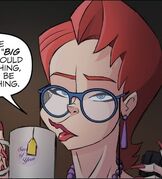 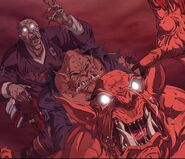 Retrieved from "https://turtlepedia.fandom.com/wiki/Teenage_Mutant_Ninja_Turtles/Ghostbusters_issue_2?oldid=429247"
Community content is available under CC-BY-SA unless otherwise noted.