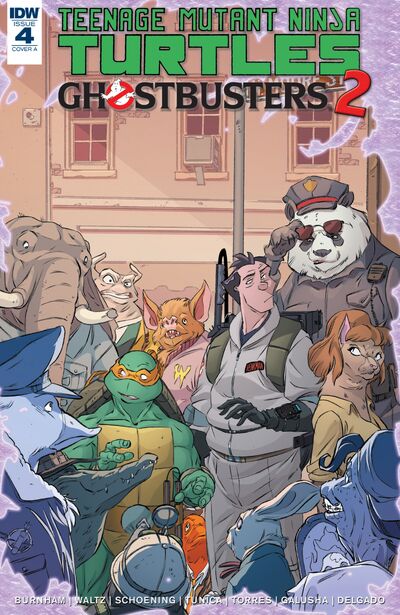 Viking spirits war over Raphael’s body! Will Ray be able to figure out a solution before Raph goes berserk?

The Collectors appear before Leonardo and Winston, and the pair fire their proton-pack weapons at the demons. But before the Collectors can kill them, they are suddenly drawn away, allowing the Turtle and Ghostbuster to escape into a different dimension.

In the purgatory, Darius Dun has summoned the Collectors a second time to demand to know why they have failed him. The Collectors are enraged at losing their quarry, and Bronson tries to speak up, arguing that Dun only did so because the price he paid has driven him insane. When Dun continues to demand to know why they have not caught the Turtles, the Collectors decide that since he summoned them a second time, the price will be his entire soul rather than just a piece of it.

However, his essence is poisonous to them, and begins transforming their bodies. When the transformation is complete, all four Collectors are now Darius Dun, without the rules that restrained them before. They decide to go after Splinter, but only after bringing him the heads of his children.

In Zoo Amsterdam, the Ghostbusturtle Dr. Dan Welker tries to talk down Michelangelo, believing that he's in the grip of a supernatural entity. Michelangelo tries to tell them that they're from another dimension, then argues that he knows the Ghostbusturtles are good people because they didn't kill Peter right away, and that they have their fingers off the triggers of their weapons. He then convinces them to examine what's on Peter's back, and they are shocked to see that it's a proton pack. Dan says that he thinks they're telling the truth, but adds that he's going to have to test them to be sure.

In the Viking afterlife dimension, Ray and Raphael are still dodging the Gjenganger in Raphael's body. After being knocked back by the Gjenganger, Ray comes up with an ingenious plan to get Raphael's body back, which involves spraying both the body and himself with mood slime in the same moment. Raphael manages to immobilize his body and spray both of them, which forces Raphael out of Ray's body and the ghost out of Raphael's. Now able to leave, they escape the dimension before the ghosts can possess them again.

They arrive in a large garden area, where Ray explains that because of Raphael's anger and negativity, he hoped that the mood slime would exorcise him as well as the ghost. As Raphael explains about why he's so negative, Michelangelo hurtles out of a portal and knocks him down.

In the Ghostbusters' dimension, Donatello and Egon have finished the trap-gate and the proton ninja weapons. After quizzing Egon about what it was like to die, Donatello notices that all three of his brothers are in the same place, which might mean they've been captured. He goes through the portal, only to find his brothers and the three other Ghostbusters waiting in the garden dimension. Ray says that there must be some error in the equipment, since the chances of all of them being brought to the same dimension are too small.

Just then, a voice says that it wasn't a coincidence, and Tang Shen appears, saying that she called her sons to her. The Turtles are amazed at the sight of their mother. 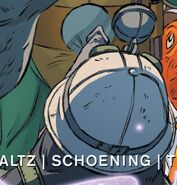 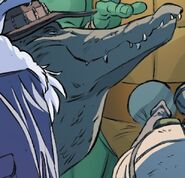 Add a photo to this gallery
Retrieved from "https://turtlepedia.fandom.com/wiki/Teenage_Mutant_Ninja_Turtles/Ghostbusters_2_issue_4?oldid=392869"
Community content is available under CC-BY-SA unless otherwise noted.