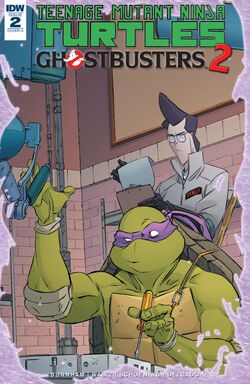 As the teams split up to evade their spectral pursuers, Michelangelo and Peter Venkman enter a dimension populated by anthropomorphic animals... including Turtle Ghostbusters!

Donatello marvels at the remote-accessible trans-dimensional technology, and Egon tells him dourly that the dimension-hopping tends to stir up ghosts. At the same time, Raphael and Ray are being pursued by a giant horned white ape, and Ray barely manages to charge up the dimensional gauntlet and open a portal before the ape can get to them. Leonardo has ended up in the oddly-familiar lair of the 1980s cartoon, where the ghostly form of Shibano-Sama is temporarily blown up by Winston.

A montage of different adventures is shown: Raphael and Ray confronting a dragon on a bed of gold and a vampire, Leonardo and Winston being chased by a boulder and flying an alien spacecraft, and Peter and Michelangelo landing in a strange room as well as the lair of the 2012 cartoon.

Donatello isn't sure why they need his help, but then guesses that the Ghostbusters lost the notes he left behind. Egon confirms that Ray lost them when he was dead, which shocks Donatello. Egon also adds that he's formulating an idea to use dimensional portals in the ghost traps to directly deposit the Collectors in the containment unite, but needs Donatello's help to make sure nothing escapes them.

Raphael and Ray end up in a snowy forest, which Ray says is safe for the moment, but Raphael senses something eerie. Just then, ghostly purple specters start appearing around them, and Ray starts "exploding" them as quickly as possible. He tries to educate Raphael on the details of why they're constantly stirring up spectral activity, but Raphael is finally fed up with portals, other dimensions and things outside his control. Suddenly an enormous ghost seizes Ray and hits Raphael from behind.

Michelangelo and Peter appear in a version of New York, Zoo Amsterdam, which is full of anthropomorphic animals. Peter lends Michelangelo his Ghostbuster coverall, and the two start strolling down the street. But Michelangelo bumps into a rat-man, and has an emotional meltdown because of how much he misses his father. Peter reluctantly comforts the crying Turtle, and takes him aside to give him some psychological care, which seems to make Michelangelo feel better. Unfortunately, no sooner have they finished their chat than they are confronted by four Turtles... which are also Ghostbusters.

Leonardo and Winston appear in a blasted apocalyptic version of New York, where they are immediately attacked by a group of robots firing laser rifles. The two destroy the robots and head for cover, where Leonardo begins blaming himself for their predicament because he didn't stop Splinter from killing Darius Dun. Winston assures him that Leonardo matches up to the great Marines he's known, and that he can't take the weight of the world on his shoulders.

Back in the lab, Donatello is suddenly zapped by the headset, and his speech patterns start sounding more like Winston's. He tells Egon that it feels like his soul is in two places "again," and briefly catches a glimpse of the Collectors between dimensions. Just then Janine arrives with various ninja weapons, and Donatello announces that he's going to make proton-powered versions of the Turtles' weapons. 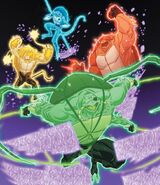 The Collectors.
Add a photo to this gallery
Retrieved from "https://turtlepedia.fandom.com/wiki/Teenage_Mutant_Ninja_Turtles/Ghostbusters_2_issue_2?oldid=533993"
Community content is available under CC-BY-SA unless otherwise noted.