Teenage Mecha Ninja Turtles is the first of 2017's "TMNT Summer Shorts" series, a collection of animated shorts that aired starting on June 4 of that year.

A futuristic New York in 2090 is barraged by mutant criminals and only a turtle team can take them down.

In New York during the year 2090, humans co-exist with mutant animals and robots. Outside a bank, the police have the place surrounded as Sgt. Swat emerges where a police dog speaks to him in dog language. As Sgt. Swat prepares to take action, an EMP bomb is thrown which disables Sgt. Swat's suit and the other weapons. This enables Grimm and his gang consisting of hyenas Jester Jim, Jester Joe, an unnamed dog, and an unnamed fox to run by the police.

In the sewers, the Teenage Mecha Ninja Turtles return to their lair where they are revealed to be piloted by Frida, Jackson, Basque, and Kusama. Their sensei, who turns out to be an elderly Michelangelo appears and praises them where he states "Tonight, you were totally boss. My turtles." 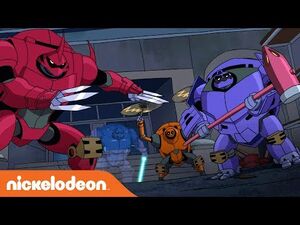