Teen Techno Turtle Trio Plus One!

Teen Techno Turtle Trio Plus One!

Teen Techno Turtle Trio Plus One! is a story by Donald Simpson which appeared in Shell Shock. It is presented as a tale of "Alternate Turtles", a "what if" they were raised by Splinter's mad scientist brother Splicer instead. It is also the first appearance of Simpson's Pteranoman, who would go to star in his own adventures later.

The story begins with Splicer, the more science-minded brother of Splinter, attempting to name the four Turtles in his charge. He first calls them Galileo, Ptolemy, Copernicus, and Einstein, but the Turtles themselves confuse their names (and don't even use the same names - instead saying Casanova, Don Juan, Romeo, and Travolta) and then Splicer calls one of them Edison...

Splicer then gives them color-coded costumes to tell them apart - scarlet red for Plato, baby blue for Socrates, orange orange for Aristotle, and grass green for Epicurus... only to have the turtles all argue over which shade of green "Epicurus" actually has.

To settle the matter once and for all, Splicer decides that weapons will decide who is who. Bogard gets a flamethrower, Mitchum gets a surface-to-air missile launcher, McQueen is awarded a power buzzsaw, and Pacino has the world's most powerful boombox. The Turtles then muddle things again by trading weapons and adding accessories (and calling each other Fellini, Antonioni, Truffaut, and Resnais in the process). This once again infuriates Splicer.

Splicer takes the Turtles to the "ultimate training ground", Dinosaur Peninsula. There, the Turtles blast a baby dino out of some bushes, and then are attacked by real dinosaurs, and their weapons end up malfunctioning (one Turtle saying that the tropical moisture must have rusted them out).

Suddenly, the Cave Babes arrive and chase off the dinosaurs. They are followed by Pteranoman, who says that his weapon nullifier was what actually ceased the weapons from functioning. Pteranoman berates the Turtles as the Dinosaur Peninsula is the preserve of the final living prehistoric reptiles and must be protected. Splicer apologizes for missing the "No Science Allowed" signs.

Pteranoman offers the Turtles to stay on the peninsula, since they would be shunned by the outside world. The Turtles then reveal that they are only actors in suits, saying "there's no such thing as a talking turtle", but they would like to stay anyway due to their fondness of the Cave Babes. However, then the actual Ninja Turtles and Splinter show up, and the Ninja Turtles chase off the impostors before they can get a syndicated cartoon show and ruin their reputation.

Splicer asks what his brother has been up to, and he's busy with the Turtles and he was taking them to on a hike and a picnic when they came across Splicer and his "Turtles". Splicer asks Splinter how he tells his Turtles apart, and Splinter reveals that he can't; if he gets any of their names wrong, they know better than to correct him. Splicer offers Splinter a ride back to the city, but Splinter says he'll just walk back as he's ogling the Cave Babes. Finally, he wonders where the Turtles have run off to. 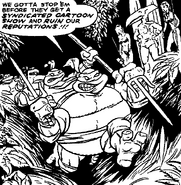 Add a photo to this gallery
Retrieved from "https://turtlepedia.fandom.com/wiki/Teen_Techno_Turtle_Trio_Plus_One!?oldid=508509"
Community content is available under CC-BY-SA unless otherwise noted.