Start a Wiki
The Technodrome is Commander Krang's warship and main base. Spherical in shape with various heavy weapons covering it's surface. It can deploy an eye-shaped targeting matrix at the top of the fortress. The Technodrome can also disassemble into small portions of it's hull and reassemble in a different location. This allows the massive fortress to travel through smaller openings and passageways. It's destructive capabilities are described as an extinction level event.

Krang made a deal with The Shredder to have him collect the part of a device called the Arc Capacitor. This device could create a portal to Dimension X and allow the Technodrome to travel to Earth piece by piece.

Shredder and Baxter Stockman complete the portal device and open the gateway to Krang's dimension, through which the modular sections of the Technodrome, begins to emerge. Upon entering the Technodrome, Krang immediately betrays Shredder, freezing him and locking him away with his collection of other defeated enemies.

The Ninja Turtles were able to intervene, confronting Krang aboard the still-assembling Technodrome, fighting him and his android body in the process. They locate the beacon around which the Technodrome is assembling and hurl it back through the portal, taking Krang and the rest of the Technodrome with it while April, Casey, and Vern shut down the portal to trap the Technodrome and Krang in Dimension X. 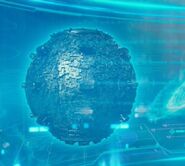 Portal to Dimension X
Add a photo to this gallery
Retrieved from "https://turtlepedia.fandom.com/wiki/Technodrome_(Paramount)?oldid=478890"
Community content is available under CC-BY-SA unless otherwise noted.