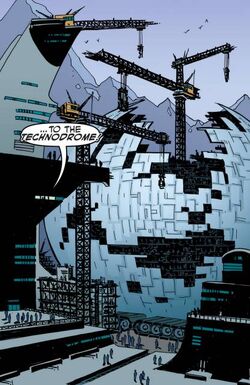 The Technodrome is a giant mobile fortress designed by Professor Zayton Honeycutt, and completed by Dr. Baxter Stockman under General Krang's orders at Krang's stronghold on Burnow Island. Stockman described it as a "work of terrifying proportions and limitless possibility," but its primary function was to terraform the Earth into a habitat similar to that of Utrominon.

The Technodrome was completed during the events of the Attack on Technodrome arc, and was tested on a part of the island to see if the terraforming would be effective. After Krang had seen and approved of the process, he declared that they would activate the Technodrome completely the following day.

However, the Technodrome's launch was delayed by an attack by the Shredder and the Foot Clan, even as Leonardo, Michelangelo and Raphael infiltrated Burnow Island. The Turtles succeeded in freeing Honeycutt, but were delayed by the machinations of Stockman, who wished to use the Technodrome for his own ends. After thwarting Stockman, Krang activated the fortress before the Turtles could stop him.

Honeycutt managed to shut down the Technodrome's main function as the Turtles defeated Krang in combat, leaving only Burnow Island terraformed. The Technodrome remained on Burnow Island, now deactivated and abandoned.