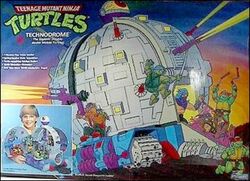 The Technodrome vehicle/playset was the mecca of Turtles Toys and sits proudly alongside the Sewer Playset and the Pizza Thrower as one of the most beloved toys in the original release. Originally priced at $50, the outside of the toy is very accurate to its show appearance, complete with four rolling tank tread like wheels a giant eye that can detach from the top and bowl over its enemies and rock blasters. Much like other toys in the line the major details lied with the many decals applied to the playset.

Splitting open on either side, the inner playset was massive and included 2 rooms in each dome half Shredder's master mutant command center with view screen, and the mutation chamber of horrors with ooze-dripping scanner in one and Krang's rotating life support throne room with escape hatch into the weapons room that can hold massive amounts of foot weaponry on the other side. The center of the playset had two entrances the spiked back portal cover and a secret ooze pit with Shredder's secret entrance both lead into the mutant jail cell. Above the jail cell was two front and rear gunner stations a figure would sit (not well as most would have to be in awkward poses to fit) to pretend fire on the turtle teens. Between the two stations was a plastic ship wheel which when pulled down would release the eye spy radar, and a trap door back into the jail. Connecting one side of the playset to the center (since only one was included) was the inter-dome connection bridge with mutant manacles to suspend your turtle good guy above the ground two others were also hooked onto the jail cell. A plastic disc called a brain scrambler would peg into the base of the playset and when wound up would spin around, placing a figure on and strapping them down with a simple rubber band would make an effective torture device.

Along the outside, the Technodrome has a number of detailing Hand grip laser guns that exist only to allow the Turtles to cling onto the side. The front and back of the Technodrome had two large guns named rock blasters. On either side massive turrets point out and pivot on a hinge with a small purple platform that could be plugged into below. Although it looks like the platform below these lasers suggest a figure can sit and operate the turret, the placement of both objects make it nearly impossible for any evil character figure to do so.

There is a number of websites (including the official site for a time) that document this toy as being released in 1988 with the first wave of toys. This is false the date stamp on the underside of the base has its copyright date as 1990. 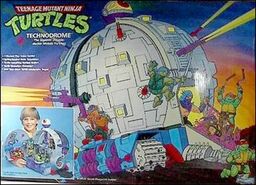 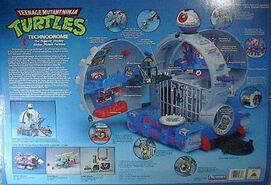 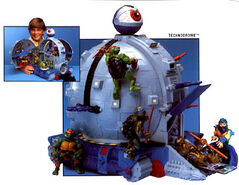 Add a photo to this gallery
Retrieved from "https://turtlepedia.fandom.com/wiki/Technodrome_(1990_toy)?oldid=469235"
Community content is available under CC-BY-SA unless otherwise noted.