This page is being turned into a disambiguation page, all of its information will be redirected to their own pages.' 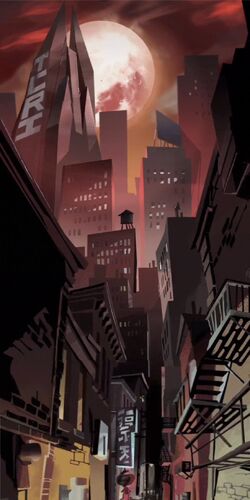 T.C.R.I (Techno Cosmic Research Institute) is a scientific corporation/organization with a large, mysterious and imposing facility in Brooklyn, New York. Though little is known of the ongoings inside the building, their organization's acronym was printed upon the canister of mutagen which transformed the Teenage Mutant Ninja Turtles and Splinter. The facility is, in actuality, the secret terrestrial base of a race of aliens called Utroms who had crashed on the planet Earth sometime in the 1960s.

Having damaged their communication systems and lost a third of their crew in the crash, the Utroms used robotic humanoid exoskeletons and false skins to infiltrate the human population of New York City, gradually amassing enough capital to purchase a facility which they turned into their base of operations. Utilizing the slowly advancing technology of Earth, they re-established communication with the Utrom homeworld, but were then told to remain in an observational capacity.

The Utroms then spent the next decade transporting salvaged material from the spaceship crash site to the T.C.R.I. building while further developing their alien technology, including a Translocation Matrix which would eventually serve as a surreptitious portal between Earth and their homeworld. However, in 1970, a traffic incident caused a canister of chemical mutagen to fall off the truck and disappear into the sewers, never to be recovered.

Fifteen-and-a-half years later in 1985, the Teenage Mutant Ninja Turtles infiltrated the facility looking for answers about their origins and missing sensei and were discovered. In the resultant struggle between the Utroms and TMNT, the Transmat and the communications system were damaged, sending the turtles across the universe and causing a bright flash of light that was seen throughout the city. New York's authorities tried to investigate the disturbance, but upon discovering that there was no way inside, besieged the facility for three days. During that time, the Utroms retrieved the turtles, but the second flash that accompanied their return signaled the NYPD and the National Guard to begin their attack. Sending robots to hold them off, the Utroms all evacuated via the Transmat back to their homeworld and transported the turtles and Splinter to safety before triggering a self-destruct initiative which caused the building to collapse.

TCRI not exist in this cartoon but the mutagen are responsible by shredder & baxter stockman.

In the 2003 cartoon, T.C.R.I.'s original branch was in Japan, but Yukio Mashimi one of the Guardians betrayed the Utroms to the Utrom Shredder, so they withdrew to New York in North America. While in the original Mirage Comics, they had been in New York the entire time and had nothing to do with the Shredder. During a fateful day, a company truck had lost a container of mutagen into the sewers, while at the same time, four baby turtles also went into the sewers. The building was under attack by the National Guard and the Utrom Shredder (in the 2003 series) in recent years, causing the Utroms to return back to their home world. In the first arcade game in the parking lot scene, a TCRI logo can be seen on one of the vans.

In the second movie it was changed to T.G.R.I: Techno Global Research Industries as the production was not supposed to have anything to do with aliens.

The T.C.R.I. building is seen briefly in the fourth episode and is mentioned as the former workplace of Baxter Stockman in the fifth episode. In The Alien Agenda it's revealed that T.C.R.I. is also responsible for the W.G.P. , Worldwide Genome Project. In episode 17, "TCRI", the Turtles discover that T.C.R.I. is the Kraang's main headquarters on Earth, and April O'Neil finds blueprints of the main building in Brooklyn. The bottom two thirds of it are ordinary offices where normal humans work, but the top third appears blank on the blueprints. The Turtles determine that this must be where the Kraang are hiding the portal to Dimension X and resolve to shut it down. With the help of April and Leatherhead, the Turtles break into the building but are captured by the Kraang. By the time they free themselves, the Kraang have already activated the portal and the monstrous Traag comes through. The Turtles are no match for Traag, but Leatherhead comes to their aid and pulls himself and the alien back through the portal. With Leatherhead gone and the Kraang surrounding them the Turtles are forced to escape, leaving the portal operational.

Retrieved from "https://turtlepedia.fandom.com/wiki/Techno_Cosmic_Research_Institute?oldid=152003"
Community content is available under CC-BY-SA unless otherwise noted.