Tea-Time for a Turtle is a two-part story arc printed in Teenage Mutant Ninja Turtles: Amazing Adventures issues #5 and #6. 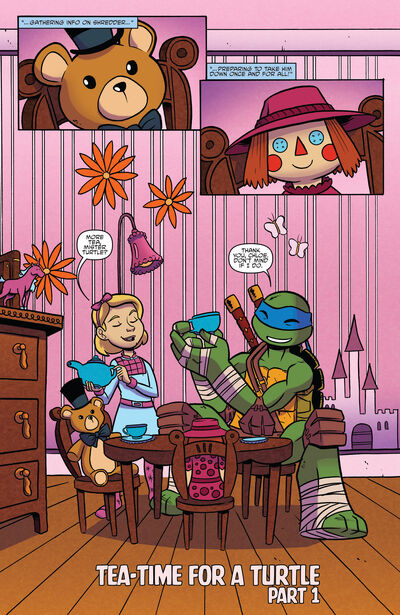 In the lair, Raphael is handily beating Donatello in a game of electronic table hockey. Raph challenges Leonardo to a game, but he declines, saying he has to go out alone for some city stealth training.

But in reality, Leo is actually visiting his secret human friend, the little girl Chloe, for more pretend teatime with "Mr. Turtle." Leo comments that he's enjoying the tea, and believes Chloe's teddy bear is enjoying it too, off-handedly remarking how he's more civilized than "Raph." Chloe lights up at hearing this name, hoping "Raph" is another talking turtle she can meet. Leo says he doesn't think his "brothers" are into teatime, but Chloe becomes even more ecstatic at the implication that there are even more turtles, and she demands Mr. Turtle introduce her to his brothers.

Back in the lair, Raph has now also beaten Mikey in hockey, and hurls some petty insults. Mikey reacts by throwing a slice of pizza toppings-first into Raph's face, which enrages Raph enough to start chasing Mikey. Raph recklessly shoves Mikey into Donnie who's sitting in the common area, and both Raph and Mikey's entire combined body weight is on top of Donnie as Raph furiously tries to give Mikey a shell wedgie.

Donnie's T-Phone buzzes with a call from April. As Raph and Mikey continue roughhousing, April tells Donnie that a giant fly was just seen breaking into a computer lab in the city, and she's sure it must be Baxter Stockman. But April also considers it suspicious, because that particular lab is out of business and wouldn't have any technology Stockman can't already obtain. Donnie agrees to investigate.

The call ends, and Donnie tells Raph and Mikey about the sighting. The news of Stockman's sighting makes Mikey ecstatic and fills Raph with dread, because Mikey takes this opportunity to change into Turflytle. Raph angrily forbids Mikey to wear the costume. Donnie suggests they clean up the huge mess Raph and Mikey created before they leave, but all three of them decide to blow it off and leave the lair together. Mikey only adds to the mess by discarding his Turflytle costume on the floor before he leaves. Splinter walks into the common area to investigate all the noise, but is exasperated to find his sons gone and the room still a mess.

Leo's T-Phone starts to buzz. Chloe disapproves, reminding Mr. Turtle of her strict rule of no phones during teatime. Leo thinks the call could be important, but Chloe insists that teatime is more important.

Leo hasn't picked up his phone, and Donnie gives up trying to call. Mikey doesn't think they need Leo, because Baxter's a "level one boss." Raph agrees, teasing that even Mikey and Donnie can beat him.

Leo decides it's getting late, and tells Chloe his brothers will worry about him. Chloe is again ecstatic, hoping this means she'll finally get to meet them. Leo tries to decline, but Chloe angrily insists that if she can't meet Mr. Turtle's brothers, he'll have to stay for more tea, and ominously reminds him that her father is still in the next room and hasn't yet come in to tuck her into bed. Leo nervously agrees to one more cup of pretend tea.

The three turtles are scouting the computer lab from the rooftops, and finally spot Stockman running out with a box in his arms. The turtles ambush him, and Donnie recognizes the box as some of the latest computing technology. But Stockman announces a trap—the turtles were lured to this location to be attacked by Tiger Claw, who ambushes the turtles with his firearms. The turtles run for cover as Donnie tries once again in vain to reach Leo over the T-Phone. Overwhelmed by superior firepower, the turtles run for their lives.

Leo uneasily finishes his pretend tea with Chloe as his T-Phone continues to buzz unanswered. 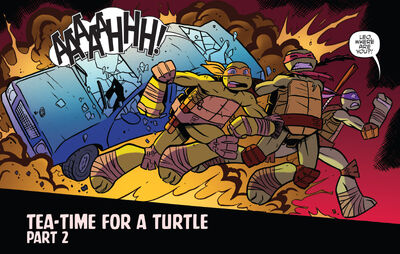 Donnie, Raph and Mikey are getting pummeled single-handedly by Tiger Claw, while Leo is a no-show who hasn't been answering his T-Phone. Mikey temporarily stalls Tiger Claw by binding him together with Baxter in his kusarigama chains, giving Donnie another opportunity to dial Leo.

In Chloe's room, Leo's T-Phone buzzes again, and he's convinced it must be an emergency, so he answers it. Chloe is angry that Mr. Turtle broke his promise not to take calls during tea. Donnie informs Leo of the dire situation and pings Leo their location even as Donnie keeps trying to dodge Tiger Claw's freeze ray blasts. Leo promises he'll be there and hangs up, but Chloe insists she come with Mr. Turtle to meet his brothers. Leo wants nothing less than to drag Chloe into a firefight, and instead tucks her in, promising he'll meet her again tomorrow if she promises to stay and go to sleep. Chloe promises, but she has her fingers crossed.

Leo uses his grappling hook to speed to the scene where he wastes no time tackling Baxter from behind. As Tiger Claw prepares to shoot Donnie frozen, Leo pushes Baxter in the path of the ray blast, instantly encasing Baxter in a giant block of ice. The four turtles take this brief opportunity to organize a group attack on Tiger Claw, who also takes the opportunity to put away his guns and wield a sword. But their attack is interrupted when Chloe abruptly shows up in the middle of the battlefield, and the sight of her causes all five combatants to halt.

Raph already encountered Chloe before in Slash and Destroy, but Mikey and Donnie are meeting her for the first time. Tiger Claw taunts the turtles for hiding behind a "cub." Chloe looks at Tiger Claw and is delighted to meet Mr. Turtle's "kitty cat." Tiger Claw tires of the spectacle and resumes his assault. Leo picks up Chloe and the turtles start retreating, but not before Chloe takes the opportunity to touch Tiger Claw's shoulder, proclaiming he's "it" in a game of tag.

During the retreat, Raph expresses dismay that Leo picked up a child, and suggests they put her down and leave, but Leo says it's not so simple. Mikey suggests keeping the girl and adopting her as a little sister, much to Raph's annoyance. Raph believes Chloe is slowing them down and has prevented them from defeating Tiger Claw sooner.

Finally, the turtles and Chloe arrive at a park with a fountain and hide behind a park bench, forcing Tiger Claw to search for them. Raph chides Leo for having tea while they were on a mission, but Donnie complains that Raph's bragging led them into Tiger Claw's trap. Chloe scolds both Raph and Donnie and demanded them to calm down. Chloe then sees the park fountain, and suggests they all go swimming, reasoning that they're the kinds of turtles who like water (to Raph's disagreement). Donnie reminds Chloe they're hiding from Tiger Claw, and Chloe dismisses the idea, considering that cats hate getting wet anyway. But Chloe's comments have inspired Leo with a new idea.

The turtles surprise-attack Tiger Claw from four different directions, startling him enough for Chloe to "tag" him again. Tiger Claw diverts his attention to Chloe, reasoning that she can use her for leverage. Meanwhile, Chloe has stepped into the fountain and is standing in the water. Tiger Claw jumps into the water after her, but Raph and Mikey swoop down—Raph puncturing Tiger Claw's rocket pack with his sai, and Mikey scooping Chloe to safety. The rocket explodes, leaving Tiger Claw unharmed, but the explosion has disturbed the fountain water, instantly drenching him. Tiger Claw takes his freeze ray and fires again, but a shuriken hits the gun before he can fire, and the gun's discharge instantly encases him in a giant block of ice. This leaves Tiger Claw still alert but now unable to move, giving the turtles and Chloe plenty of time to get escape and take Chloe home.

In Chloe's darkened bedroom, Chloe's father peeks through the door to see that his daughter is asleep, unaware that four turtles are concealed in the dark behind the door. When her father leaves, Chloe asks the turtles if they can return every night, but this is impractical. Chloe asks if the four of them can at least stay for tea and etiquette training. Raph cringes at the idea, but Donnie that Raph can't handle being the best at something, instantly shaming Raph into staying.

Chloe and the four turtles sit at her table for tea—this time, not for pretend, but with actual tea and cookies. Mikey doesn't waste an opportunity to show off balancing a teacup on his nose, while Raph appears to be actually enjoying himself.

Add a photo to this gallery
Retrieved from "https://turtlepedia.fandom.com/wiki/Tea-Time_for_a_Turtle?oldid=488701"
Community content is available under CC-BY-SA unless otherwise noted.