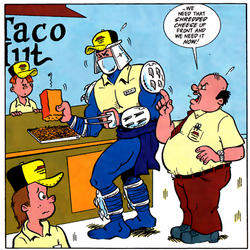 Taco Hut was Shredder's place of employment prior to turning to villainy - at least, according to the strip "What the Shredder did for a Living Before he was an Arch-Villain". Although he used his claws to shred cheese, he apparently did not perform the task speedily enough to the satisfaction of his boss.

The logo and name of Taco Hut is a parody of Pizza Hut's, and the name also calls to mind large taco food chains such as Taco Bell and Taco Time.

Retrieved from "https://turtlepedia.fandom.com/wiki/Taco_Hut?oldid=383063"
Community content is available under CC-BY-SA unless otherwise noted.