TMNT is a single-player action-adventure multi-platform action game starring the Teenage Mutant Ninja Turtles. It is based on the 2007 film of the same name, and was released three days before the actual movie's release for the Xbox 360, Wii, PlayStation 2, and Nintendo GameCube video game consoles, as well as for the PC on March 20, 2007. It follows the basic plot of the 2007 film TMNT, straying from it in very few aspects. The Xbox and PlayStation 3 versions of the game were canceled.

Ubisoft secured the rights from Konami, who had produced all the previous TMNT video games. The game's creative director Nick Harper said "The TMNT movie is all about the emotions associated with family and teenage angst. We've taken that philosophy and turned it into gameplay mechanics that will be fun and challenging." Ubisoft has stated the focus within the game is "on the four turtle brothers finding out their differences and getting through family problems". Ubisoft, alone has developed and produced this game.

The game's plot is based on the 2007 film TMNT, but is told in the form of a flashback by the Turtles and Splinter.

After having defeated their prior arch-nemesis, the Shredder, the Turtles have grown apart as a family. Leonardo had traveled to Central America to improve his ability as a martial artist, and as a disciplined leader. He also obtains a mysterious medallion.

In Leonardo's absence, the remaining the three Turtles go their separate ways. Raphael adopts a vigilante-styled persona known as the Nightwatcher, Michelangelo gets a job as a children's birthday party entertainer (or punching bag), and Donatello becomes a telephone computer-support assistant.

When Leonardo comes home from his long venture, there is immediately strain in his relationship with Raphael.

For the most part, the action aspect of the game occurs within numerous "areas" (or closed sections of a level) where you must defeat a certain amount of enemies to proceed.

The adventure aspect of the game is mainly based upon different level locations. There are no real items to obtain that are directly related to gameplay, and the level structure is very linear, allowing very little exploration.

The character movement is very fluid and tight, and the roof-top platforming levels capture the feel of the film quite well.

In many ways, this game's gameplay is immensely similar to Ubisoft's "Prince of Persia" game series.

The game features 16 levels, 16 story and 16 unlockable challenge levels. The game also features four playable characters, each with their own unique fighting style and abilities. The game encourages cooperative gameplay, as the player will have to use each turtles special abilities to navigate through their environment.

The controls in this game are very tight. While Xbox 360, PlayStation 2, and Gamecube versions of the game use gamepad as the input device, the Wii delivers a different experience, due to its unique motion-sensitive controllers. Movement and rotation of both the Wii remote and Nunchuk extension serve the purpose of achieving common movements. While the Wii version of the game does utilize the motion-sensitivity of its unique controllers, it does not incorporate free-movement in the main game.

Leonardo searches for an ancient medallion placed in a temple by Splinter. He climbs many mountains and finds many moves handy when facing walls and ledges. He encounters soldiers, but is able to defeat them. He reaches the temple and claims the medallion.

Raphael is depressed with Leo's absence and becomes the Nightwatcher. He manages to defeat several enemies and stand atop a building watching the city.

Donatello is searching for gadgets in the sewer for some inventions. He encounters "Black Gators" and is forced to flee from them as they are aggressive. He encounters General Gato. He is very agile, but Don overpowers him and leaves the sewer before nearly drowning.

Michelangelo is a birthday party comedian named Cowabunga Carl (being beaten at birthday parties). When Don can't come to him he must go to Don. He encounters "Purple Dragons" (like Raphael/Nightwatcher encountered in Vigilantism) that delay him from reaching Don, however he annoyingly reaches Don.

Leonardo find use for the medallion to get him through certain Non-Solid objects. He encounters many soldiers and ends up saving people from a burning village. And is claimed a hero.

Leonardo finds that he has been parted from his brothers for two years and decides to play a game of Ninja Tag. Mike and Don take the lead, while Leo and Raph argue. Concerning Don and Mike. Eventually they face the foot ninja who they defeat very easily. They head through a burning building, but escape and Michelangelo and Donatello win, While Raphael and Leonardo continue to argue. But that ends.

The four find several foot ninja and arouse suspiciously when they see a monster. They pursue the monster and come to a deadlock against it. They defeat it and quickly head home before they are spotted.

Raphael doesn't believe that the police managed to do their job properly and decides to find the monster himself as the Nightwatcher, only to find that a truck is taking it to Winter's Tower. He pursues the truck only to be surrounded by foot ninja. He defeats them and continues to pursue the foot.

The Nightwatcher enters the Tower and fights the foot. He defeats them to discover that Karai and Winters are working together. He eventually faces rain and heavy wind. Only to climb to the top of the tower to face General Mono. A very powerful General. While Nightwatcher does puts up a good fight against him he manages to blast the Nightwatcher off the roof and win.

The four decide to find a route to Winters' Tower together. Only to be delayed by slime and the foot. The four find out that they were wrong and end up on a train. They decide to go back to the sewer before anyone saw them.

Leonardo is sent to find something "red with rage and green with envy" he finds out that it's Raphael. And pursue to find him. Purposefully falling into the Purple Dragon's traps and beating them. He finds Raph and he too received a riddle "animal's live in it, but prefer to live out of it." Leo tells him that it's a zoo and they have to find something that resembles a zoo. They find it only to find Oroku Saki's (Shredder) cloak. They flashback to the last time they fought Shredder and discovered the path to success is teamwork.

The turtles decide to split up and search the town. Raphael goes as the Nightwatcher saying "Whenever he's alone he prefers to be the Nightwatcher". He defeats several Black Eaters and foot only to stop at "Pete's Diner".

Leonardo hunts for Raphael to talk to him, but he finds out that he is the Nightwatcher. Raph flees only to lead Leo to capture. Raph chases Leo, but is confronted by General Serpiente. She tells Raph "We need only one of you alive. Which makes you ex(hisses)pendable". He fights her only to be gassed and nearly dies. Donatello and Michaelangelo find Raph and help him. They defeat Serpiente and return home.

Raphael reveals that he is the Nightwatcher and that Leonardo has been captured. Splinter says "Well then, I believe your brothers may be in need of a leader" Which means Raph must take charge and they must rescue Leo. Donatello uses his Micro Transmitter to find Leo. They find Leo only to be confronted by several foot ninja. They rescue Leo and flee just before the crypt demolishes completely. And the turtles are reunited.

The four decide to search Winters' Tower for clues, only to find several foot ninja. They are defeated and they pursue Winter's.

The four end up climbing the Tower and find a demolished section of the Tower. Raph says "It wasn't me it was the Nightwatcher" to joke with his brothers. They find Winters' injured. He explains that he was a warrior named Yatol with the stone generals, but they were turned to stone, and Winter's was made immortal. They reach the top to find. The stone Generals. They fight General Gato and kill him. Which leads them to kill Mono and Serpiente. They faced the un-faced General Aguila. They struggle, but defeat him. With them and the monsters back through the portal. Winters/Yatol is free to die in peace.

A demo of the game exists and is available online. The demo begins on Ninja Tag Time and the Turtles have 8 minutes to get as far as possible. It includes everything starting with the intro of the level. However, coins are useless and no memory is saved after the time limit is done.

TMNT has received mixed reviews with many critics praising its action platforming, while criticism went to its repetitive combat, bad camera, and lack of multiplayer. IGN gave the GameCube, Xbox 360, PlayStation 2, and PC versions a 6.0 out of 10, saying that the game is "Strictly for the kids". The Wii version was criticized for using very little of the Wii Remote's unique capabilities, since one can only move the remote back and forth to use the turtles' weapons, with the weapons lacking free-direction attacks. When reviewing the Nintendo DS and Wii versions of TMNT, the UK Official Nintendo Magazine commonly compared the two games to the 1989 arcade game of the same name, and even said in a hint guide that "Turtles games were once better".

As of April 26, 2007, TMNT has sold 1.1 million copies across eight platforms.[1] For the PlayStation 2, it was re-released as part of the "Greatest Hits" label. 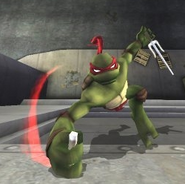