TMNTPedia
Register
Don't have an account?
Sign In
Advertisement
in: Ninja Turtles: The Next Mutation, Canceled films

TMNT: The Next Mutation 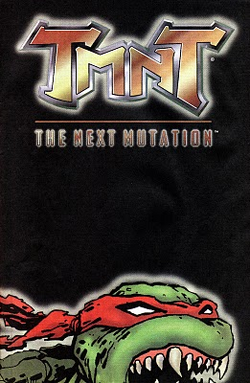 TMNT: The Next Mutation was a film concept designed to follow up after Teenage Mutant Ninja Turtles III, but it was shelved. The idea behind the film was that the mutagen in the heroes' bloodstream was beginning to change with age, which had effects on them.

The subtitle, although not the concept, was recycled into Ninja Turtles: The Next Mutation.

Peter Laird talks about TMNT: The Next Mutation

The general idea was that the Mutagen was continuing to change the Turtles and Splinter, giving them new abilities -- and new problems.

Don was given the least obvious mutation -- growing telekinetic and telepathic abilities, unfortunately counterpointed by diminishing eyesight (hence the vision-enhancing goggles). We also provided him with an updated “techno” version of his bo

The “rising sun” bandanna on Leo in this version actually comes from a much earlier costume redesign session, when we were toying around with changing the costumes for the Turtles in the comic books. I kind of dig the “utility belt” Leo has in this drawing. I believe Leo’s new mutation was the ability to morph his skin into a kind of nearly impenetrable chrome-like surface (shades of Ben Boxer from Jack Kirby’s “Kamandi” comics!).

We wanted to give Splinter a much more active part in the battles that the Turtles fought, and so he was going to have the ability to morph into a big, lithe, muscular “super rat mutant” type of thing.

Here we gave Mike a more “street” look because his new mutation gave him the ability to project a human appearance onto his turtle features, allowing him to interact freely with humans.

This reminds me a little of an even earlier idea Kevin and I toyed with for the TMNT comics. We had this (admittedly more than a bit goofy) plan to have Donatello make "human disguises" which the Turtles could wear that would allow them to move around undetected in public. These disguises would not have survived really close examination, though... for example, to accommodate the Turtles' three-fingered hands, they would wear special latex gloves which from a distance would look like human five-fingered hands, but actually had the index finger and middle finger fused into one, and the other two fingers also fused together in this way. I think I have a quick sketch of this somewhere, but I haven't seen it in a while.

One of our ideas was to give Raphael the ability to “morph” into what we were calling “Raptor Raph”, complete with big gnashy teeth and claws to complement his big gnashy personality.

This was not much of a stretch, obviously. In retrospect, while this new approach was probably appropriate for Raph, it was also uncomfortably close to what we were proposing for Splinter.

Years later, during the Volume 4 run of my TMNT comic, I decided to (temporarily) transform Raph into a beastly-looking thing with some similarities to this iteration (minus the "morphing" powers). However, I think the look that Jim Lawson came up with for what some fans call "GameraRaph" is a lot cooler looking than this.