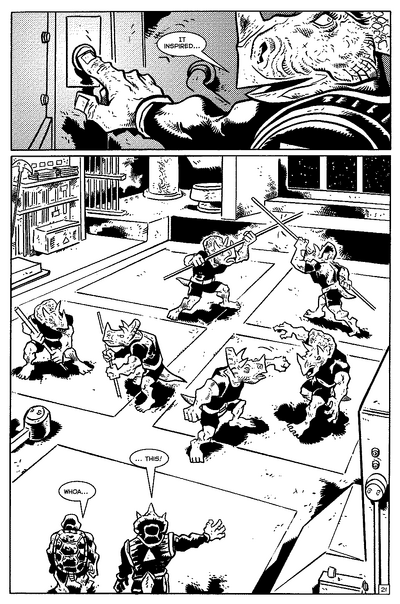 T'jat uhasil is a Triceraton martial art of recent origin, directly inspired by observations of the turtles' ninjutsu when they fought in the Tri-Sports Arena during the events of Eastman and Laird's Teenage Mutant Ninja Turtles volume 1 issue #6: The Triceraton Homeworld.

As T'Zirk, himself a t'jat uhasil practitioner, explains in volume 4 issue #28, the phrase t'jat uhasil means "soft kill" in the ancient Triceraton language. He tells Michelangelo that the turtle and his brothers exposed a weakness in traditional Triceraton close-quarters combat—its overreliance on brute strength to overwhelm an enemy. Based on a heavy analysis of that fateful day's Tri-Sports Arena footage, Triceraton martial artists were able to identify and learn from the turtles' ninja techniques to improve their own fighting, and t'jat uhasil was the end result of this study.

Since t'jat uhasil more resembles Earth ninjutsu and does not rely on brute strength alone, its most capable Triceraton practitioners are usually smaller in stature and far more agile, much like the turtles themselves. T'jat uhasil comes to prove itself an invaluable tool in training an entire new force of stealth commandos for the Triceraton Republic.

T'Zirk invites Michelangelo to train with his squadron, T'Zirk's Terrors, and even though the turtle is out of practice from his brutal detention by the Styracodons, he still easily defeats one of their best commandos while sparring, thus proving his value in helping further improve the martial art.